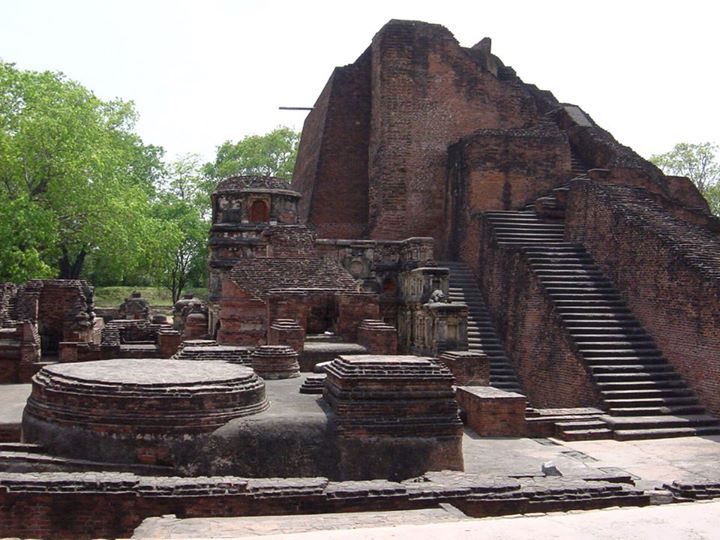 Nalanda is one of the most ancient international centers of education and learning equivalent to modern universities, with a very rich library. An inscribed seal written "Sri-Nalandamahavihariy-Arya-Bhikshu-Sanghasya" identifies the site as Nalanda Mahavihara.

Nalanda has a very ancient history and goes back to the days of Mahavira and Buddha in sixth and fifth centuries B.C. Many references in the Pâli Buddhist literature mention about Nâlandâ. It is said that in course of his journeys Buddha often halted at this place. It is also the place of birth and nirvana of Sariputra, one of the famous disciples of Buddha.

The place rose into prominence in 5th Century A.D. as a great monastic-cum-educational institution for oriental art and learning in the whole Buddhist world, attracting students from like Hiuen Tsang and I-Tsing from China and other distant countries. The galaxy of luminaries associated with it includes Nagarjuna, Aryadeva, Vasubandhu, Dharmapala, Suvishnu, Asanga, Silabhadra, Dharmakirti, Shantarakshita. Another important mention in history, is that around second century, Suvishnu built one hundred and eight temples at Nalanda to prevent the decline of the Hînayâna and Mahâyâna schools of Buddhism.

Nâlandâ had now acquired a celebrity spread all over the east as a centre of Buddhist theology and educational activities. This is evident from the fact that within a short period of thirty years following Hiuen Tsang's departure, no less than eleven Chinese and Korean travelers are known to have visited Nalanda.

Life lead by Nalanda monks is regarded as the ideal to be followed by the Buddhist all over the world. This celebrity status persisted through ages. It is also attributed that a detailed history of Nalanda would be the history of Mahayanist Buddhism.

The institution was maintained by the revenue collected from the villages bestowed specifically for the purpose by the contemporary rulers as evident from inscriptions. Royal patronage was therefore the key note of the prosperity and efficiency of Nâlandâ.

Wouldn't it be nice if you mentioned how and why the university was destroyed. Imagine a University destroyed for the want of a book, Barbarians!.

How naive can you be??? Anyone who wants a book, appreciates a book can never DESTROY a library! It is an act of the illiterate ones who have never held a book, never had a desire for it, and would be damned if they would allow others to be informed.

Read related posts... pl. This topic has been discussed in detail by the Page Admin.

Yes...Nalanda was destroyed and we have discussed enough about it in the related posts on this page. History has happened...and its time to move on. This post enlightens us further about the university and its greatness in its historical context.

So should we continue like dogs and chew on the same bone over and over again Mr. Sanjay Madhava?

I don't think any more discussion is needed on the destruction of Nalanda. There are enough hate pages on Facebook for that. People who like to hate can go there to vent their pent up hate and feel good.

Buddhism teaches introspection and stresses on insight. Human mind has great potential if properly harnessed. And that was what Nalanda was. Profound insight. And if we adopt that again, another Nalanda can be created. Just believe in yourself and your insight.

Achnitya sexena, have you ever heard that those who don't learn from the lessons of history are condemned to see it repeated. Obviously you would have no tears to waste on some-thing like the destruction of the bamiyan Buddha statues.

this should be tought in our schools

It's a place worth visiting.

Achnitya sexena, there's a difference between hating and being hated. We may not hate but we remain hated. What is the fate of hindoos in afpaqbang? And there's a difference between hatred and awareness. People like you would pretend that the Jewish holocaust or the ethnic cleansing of Kashmir never happened. You have no tears to shed except perhaps you would cry the loudest for the victims of the gujerat riots. I do not mean for a second that I support any kind of violence but I'm not selective in my approach to it.

a thing of beauty is joy for ever.this place realy prove it.

What i is there to be learned. In such a situation the entire universe will be proud of ancient Indian Knowledge.