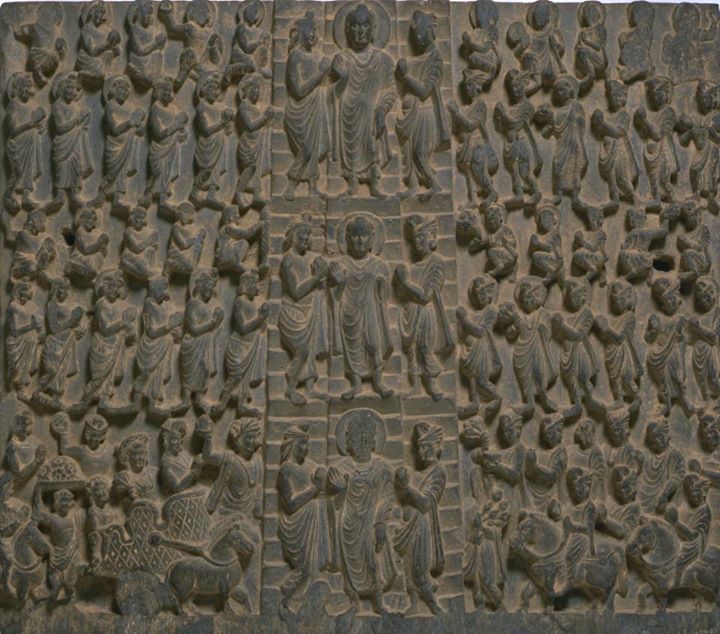 The Buddha chose to ascend to the heaven of the Thirty-Three Gods (Trayastrimsa, equivalent to Indra's Svarga Heaven) in order to preach to the gods and his mother who also resided to earth at Samkashya (Sankisa), which remains to this day one of the eight holy Buddhist pilgrimage sites. This descent was achieved with three celestial stairways, in three stages (echoing the three strides of Vishnu in Vedic mythology). This roughly square relief accurately depicts these aspects of the legend. The Buddha is shown sequentially three times descending the central steps (said in ancient texts to be jewelled) in a vertical register in the middle of the panel. In each sequence he is flanked by the attending figures of a turbaned Indra to the right and Brahma shown as an ascetic with tresses piled up on his head, to the left. Each of them descends on his own adjacent stairway, (described in the texts as being of gold and silver respectively). These attending Hindu deities pay homage to the Buddha, facing towards him with their hands joined together, having been converted by the wisdom of his teachings.

The Buddha's descent is witnessed by an assembled cast of celestial and human worshippers, arranged over six rows on either side of the staircase. The upper four rows contain divine devotees, distinguished by their nimbi in alternate floating rows of kneeling and standing figures. The two lower registers depict the lay faithful, some of whom are princely figures on horseback and, of particular interest, on the lower left hand side, a horse-drawn chariot, the body of which is decorated with a chevron pattern starred with central dots under a deeply curvaceous top-rail. The chariot carries a turbaned man and woman with a wreath headdress carrying a lotus stem, and a smaller figure clutching the rail and peering round the woman with his leg raised up onto the edge. This group, according to Ackermann, may be intended to refer to King Udayana of KAUSAMBI, who is remembered in Buddhist legend as the first to commission an image of the Buddha (a sandalwood sculpture), and who is described as being present at this miraculous event. The others may be his queen and the crown prince. An attendant stands behind the chariot, bearing a flower tray on his head from which others appear to be casting flowers in celebration of the Buddha's return to earth.

The wide sweeping folds of the Buddha's robes seem to anticipate the distinctive style of the Buddha's robe treatment associated with the Gupta period in India, and point to a late 3rd-century date. All the Buddhas are shown in a swaying pose as the weight of his body is taken on his right leg with the left leg poised to step down. The right arm is held aloft in abhaya mudra while the left is held up under his robes in the middle scene with the top and bottom Buddhas holding their left arms down by their thighs. The lowest Buddha has lost his face but the other two heads remain intact with differing hairstyles: the top one has his hair in straight ribbed strands rising up to an ushnisha, but the middle one has wavy locks rising to his one.

The panel is shown without any frame, but the row of figures at the bottom edge are shown on a plain plinth, in the middle of which, just off-centre below the figure of Brahma, is the silhouette of what possibly might have been the figure of a donor.

This relief has a very special significance for me. My ancestors who came down to the plains from Nepal in the 7th Century, during the reign of Emperor Harshvardhan, settle in Sankasya (near Kannauj) - where this incident is said to have occurred. My father's side of the family uses "Sankas" as a Gotra, which is most unusual as all the Gotras are after the lead forbearer of the clan either a Rishi or a group of Rishis, but never a place.

Thanks for sharing this relief with us.

Lot of thanks for sharing , its amazing