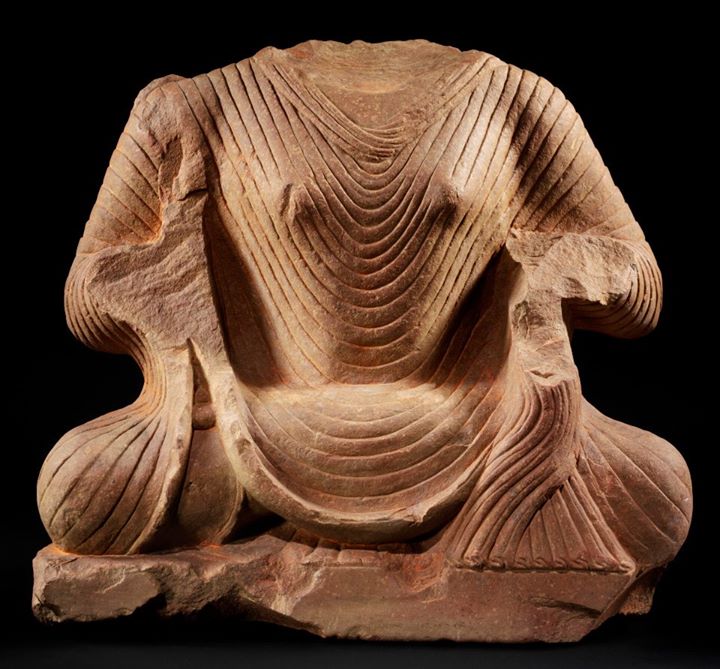 Seated Buddha, with highly developed physical displaying 'inner breath' (prana) beneath the articulated folds of the monastic robes. The yogic posture is combined with a communicative Buddha type, geturing to his followers.

This is a spectacular sculpture of great presence and historical importance. The over-life sized seated figure of the Buddha, legs crossed tightly in a strict meditative position (padmasana) and chest fully extended with yogic disciplined breath (prana), creates a powerful image. The figure wears a form-defining robe of untailored cloth (sanghati), worn in the monastic manner. The folds of the robes are deeply incised to give the entire figure a remarkable degree of surface animation. The missing hands were in all probability, and judging from extant examples, displaying the protective abaya-mudra gesture with the proper right, and holding the ends of the pleated monastic robes with the raised left hand.The figure is seated on an integrated unadorned plinth.

This sculpture belongs to a select group of related Buddha and Jina images. It compares most closely in terms of proportioning and the stylistic rendering of the robes, with three dated sculptures belonging to the same school. Two were excavated at KAUSAMBI and dated equivalent to 161 AD. The third was recovered at Sravasti, to the east of Mathura, and is inscribed with a date equivalent to 213 AD.

The style of this Buddha, along with these dated examples, represents a clear second-phase in the development of the Buddha-type under the Kushan dynasty. The pure Mathura style begins in this phase - around the second half of the second century - to reflect a strong stylistic dialogue between the Buddhist schools of Mathura and Gandhara. The drawing of the robes over both shoulders, as opposed to the earlier Mathura convention of leaving one shoulder exposed, is an innovation of this period seen at both centres.

wow! thanks for putting this.