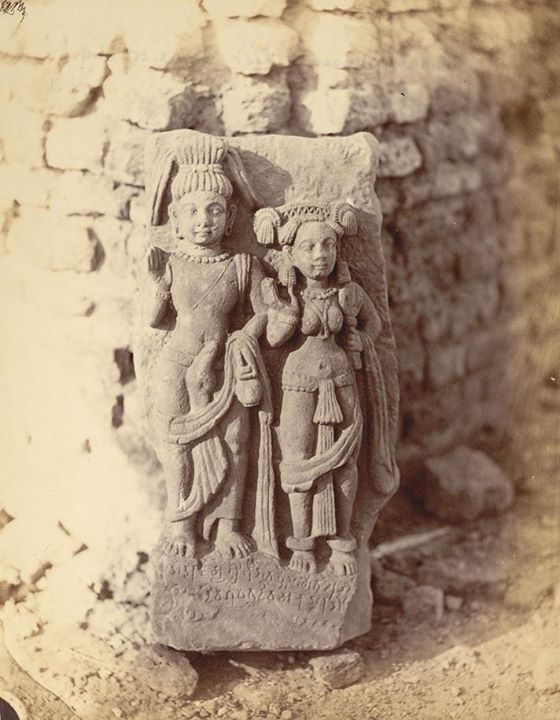 Photograph of an inscribed statue of Shiva and Parvati, from Kosam, Allahabad District, take by Joseph David Beglar in the 1870s. Kosam, now known as Kausambi was an important city from before the Mauryan period. The site has yielded sculptures from many eras. The piece shown in this photograph is now in the Indian Museum, Calcutta. In his reports of tours of 1874-75 and 1876-77, A. Cunningham wrote, "In a field near the great monolith, ...a group of Siva and Parvati was exhumed by the owner. The two figures are standing side by side, each with the right hand raised and the open palm turned to the front. In his left hand Siva holds a water-vessel, while Parvati carries a trisul...On the base there was an inscription of several lines, of which only the two upper ones now remain. The characters are exactly the same as those of the early Gupta inscriptions...From this we learn that the statue was dedicated on the 7th day of the second month (name of the season lost), in the year 136, during the reign of Maharaja Sri Bhima Varmma...Bhima was most probably the Raja of Kosambi itself, which in those days and for several centuries later was the chief place of the Lower Gangetic Doab."

Thank you Mita Chakravorty for mentioning this book in one of your posts. Its great to know that N.N.Ghosh, the celebrated archaeologist and the author of this book was also your grandfather.

so much we have lost

lost because of a name which I don't like to mention. don't wanna hurt anybody. still the concept is alive in this world in a rather deadly form.... still killing and destructing

Exquisite ! Nice to see an intact piece with such lovely expressions.