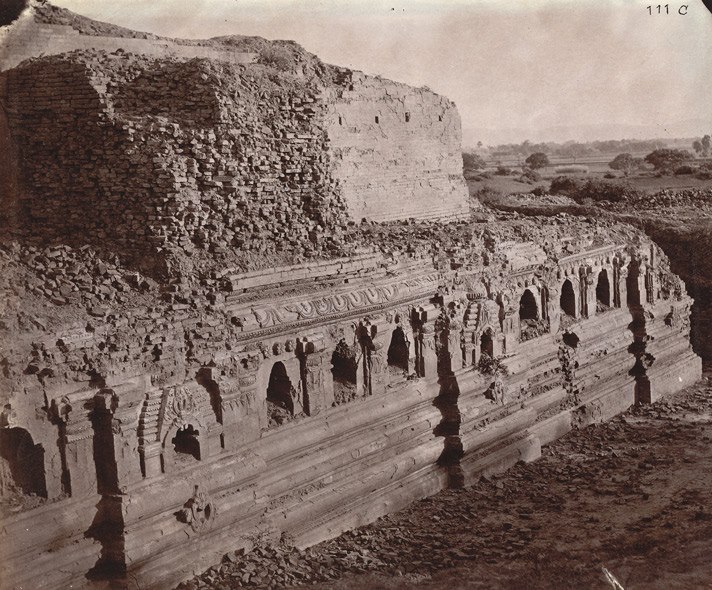 Rear view of ruins of the Baladitya Temple, Nalanda - 1872

Photograph of the rear view of the ruins of the Baladitya Temple at Nalanda, Bihar, taken by Joseph David Beglar in 1872. While these ruins date to the sixth century, Nalanda was originally famous as the sanctuary of Shariputra, one of Buddha's followers, almost a millennia before. It was visited by Buddha and Ashoka, the Mauryan Emperor, however there are very few archaeological remains from this early period of occupation. Nalanda soon became a major centre of Mahayana Buddhist studies and by the 7th Century scholars from all over Asia were visiting and studying at the monasteries and university. As time passed it's importance waned until in the 13th century, Muslim influence in the area became stronger and Nalanda was abandoned by Buddhists. Today, the site consists of a row of nine ruined Buddhist monasteries and four two-storey square temples with raised central sanctuaries, one of which can be seen in this photograph. The outside of the latter were decorated with pilasters and images set in niches.

James Burgess wrote in 'The Ancient Monuments , Temples and Sculptures of India' that, "Among the ruins of Nalanda, the most notable is the Temple of Baladitya (Narasinhagupta) King of Magadha, who ruled about 530.A.D. It was partly excavated in 1863 and more completely in 1871 and a short description on the door jamb, in the reign of Mahapali-deva, records a donation to the temple in Samvat 913 or A.D. 991, by an oil merchant of KAUSAMBI named Baladitya of the Mahayana School. The base is 80 feet long and the temple is built of brick partly faced with stone. It was part of the great monastic establishment of the great Buddhist School, where Hiuen Tsiang the Chinese pilgrim studied when he visited India in about 640 A.D. and of which he gives so full an account.'

Any links showing latest pictures of these ruins ?

i wonder who dis king baladitya is ??? I opine In all probability he may b king yashovarman[yashodharman] who ruled during d steep decline of gupta period n is mentioned in mandasor inscription as d victorious king over huns who invaded india arund 500-600 AD.he may hav taken d imperial title of narsimhagupta[lion amongst the gupta kings]..magadha has sm of d superb marvels of world...nevertheless magnificient temple :)

I don't even remember seeing this in Nalanda

@vaijayanthi...its in ruins...wic d article mentions !!! May b it may hv missed d glance of visitors ....

very similar to the temples of south India

recent pics show it is maintaied by archeological dept

It was not 'abandoned' but burnt down by Bakhtiar Khilji, the Turkish invader. The library burnt for months. The event is still fresh in folk memory as any visitor there will testify.

Wow this info is new to me

love this picture........i want all information about nalanda? is possible?

This is called whitewashing of history! Typical pseudo-secular bias!

It was the university with it's relics that were burnt down and thereafter the temples (as above) were abandoned by the monks. With the rise of Buddhism in India, there arose many centres of learning which did not exist before. As a result Buddhist India came to have five major universities which achieved wide fame. These five were Nalanda, Vickramasila, Odantapuri,Jagadalala and Somapura. In the 10th century when Hieun Tsang entered the university, there were 10,000 resident students. It's chancellorship was reserved for India's foremost Buddhist scholar. At that time there were 10,000 students, 1510 teachers, and about 1,500 workers at Nalanda. Students from foreign lands such as Tibet, China, Japan, Korea, Sumatra, Java and Sri Lanka were found there. Admission to Nalanda was by oral examination. This was done by a professor at the entrance hall. He was called Dvara Pandita. Proficiency in Sanskrit was necessary, as it was the medium of instruction. All Chinese monks going to India for higher studies in Buddhism had to go to Java and brush up their Sanskrit. It is reported that of the foreign students only 20% managed to pass the stiff examinations. Of the Indian students only 30% managed to pass and gain admission. Therefore the standard required were high. Casts, creed and nationality were no barriers in keeping with the Buddhist spirit. There were no external students at the university. Nalanda was maintained by the revenue from seven villages which were granted by the king.

During the Gupta age the practice and study of the mahayana flourished. However, from 750 AD, there was an increase in the study and propagation of the tantric teachings. This is evidenced by the famous pandit Abhayakaragupta, a renowned tantric practitioner who was simultaneously abbot of the Mahabodhi, Nalanda and Vikramashila monasteries. Also Naropa, later so important to the tantric lineages of the Tibetan traditions, was abbot of Nalanda in the years 1049- 57. Perhaps the reason why the university was burnt down by the invader.

>> Perhaps the reason why the university was burnt down by the invader. Perhaps the reason for it was the same the one as the destruction of nearly every other religious structure under the Islamic horde of Turko-Mongols? Just perhaps? :D