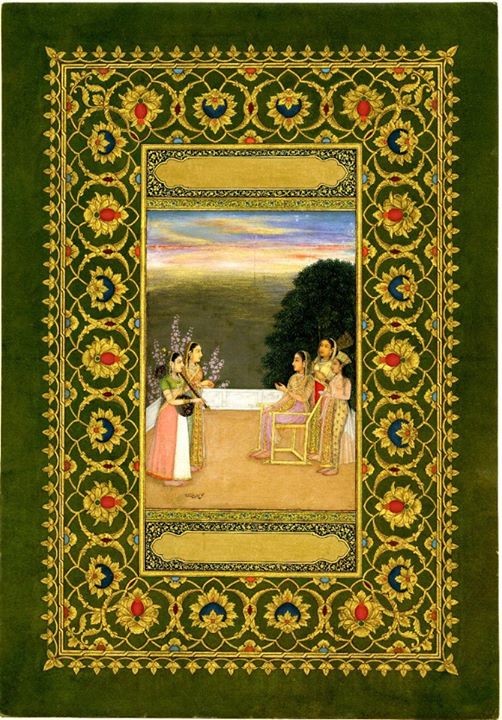 A lady seated on a chair on a terrace with two attendants listening to music. Signed.

Now compare this with the "princess listening to music" Of Guler style and we can perceive the lack of exuberance which marks a pahari painting...in my mind the mughal paintings as with their architecture was slightly over the top... and at its best, symbol of luxury with overdecorative borders and highly stylized affectations...reminds me of fabarge eggs!!

The cultural inspirations behind the Mughal and the Rajasthani/Pahari paintings are divergent enough to preclude their direct comparison. Persian influence on the former derives from secular illustrative traditions associated with their classics, chronicles and tales and were devoid of mystical or spiritual inspirations to animate them. Such worldly conceptions of their paintings were carried over to representative scenes of Hindu epics too, as depicted in the Razm-Namah, a Persian translation of the Mahabharata. Such works typically showed courtly scenes and thus were necessarily formal in character. The Pahari paintings, though infused with Mughal ideals, are a derivative of the folk arts of the earliest times, as noted by Coomaraswamy who was probably the first to introduce and explain these styles from the "mountainous Punjab". Thus, even royal portraits appear to express humane charm, as can be gauged by Nainsukh's work on Balwant Singh. Renewed allegiance to Vaishnavism formed the spiritual basis of their efforts, and the amorous games of Radha and Krishna gave expression to the mystical experiences of love they occupied themselves with.