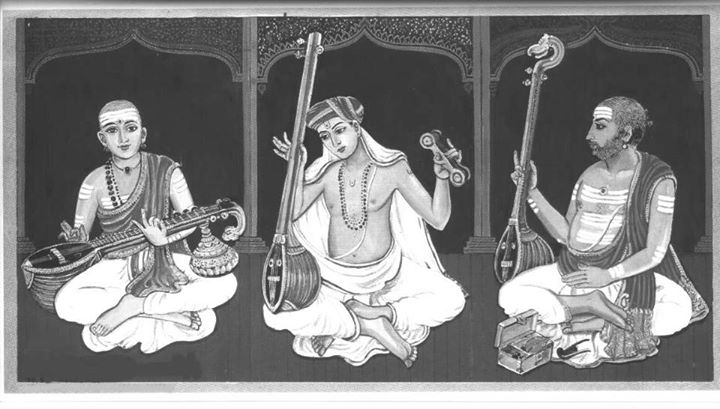 Digital Rare Book:
The Ragas of Karnatic Music
By N.S.Ramachandran
Published by University of Madras - 1938

The logic of the theory of Karnatic Music cannot be understood without a historical study of its development. Such an estimate would show that even from remote ages the North and South were in intimate cultural contact, and legend as well as history shows how inextricably Aryan and Dravidian culture became blended even before the era of Christ. The Srutis which are of fundamental importance to both systems were conceived as even before the time of Ilankovadigal. Throughout the centuries we find
the North and South mutually influencing one another in the development of the arts. Mahendra Varma Pallava published by carving on stone some compositions of the musical system of the North at Kudimiyamalai in the 7th century A.D., and, we find that a Tamil footnote is added to the inscription. Nanyadeva in his commentary on the Natya Sastra mentions Karnatapata tanas, and gives many other references to South Indian music. Even Matanga refers to Dravidian music. Sarngadeva defines a raga called Devaravardhani. Throughout the history of Sangita literature we find a free exchange of opinion between the North and the South. Alauddin Khilji took with him musicians from the South after his invasion of the country and Pundarika Vitthala who was born in Atanur in the extreme south went to the court of Khandesh and wrote 2 treatises on North Indian music. Northern authors also took note of the views of South Indian theorists. What is most important to note is that every author from the time of Kallinatha, who represented the music of the Vijayanagar empire, bases the theory of Karnatic music on the doctrines of Bharata and Sarngadeva.