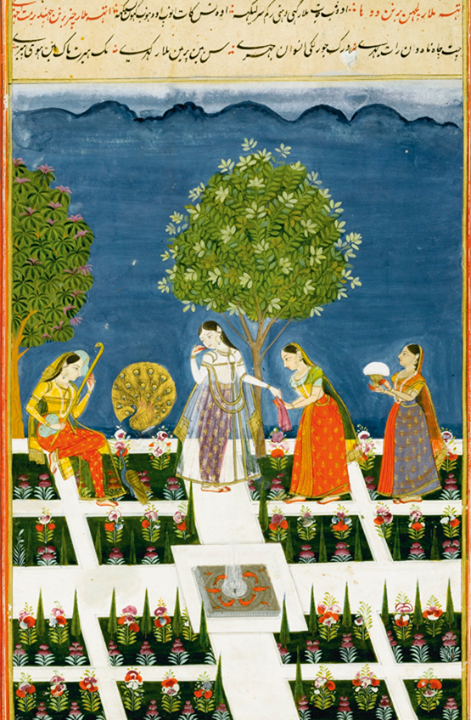 Article:
What is Ragamala?
By Lizzie Watson

Lizzie Watson, exhibition curator at Dulwich Picture Gallery, traces the origins of this genre of Indian miniature painting back to its roots in ancient Indian music

For 400 years it was one of the most prolific genres of Indian miniature painting, yet the term ‘ragamala’ remains elusive, frequently mistaken for the name of an artist or school of painting. So what is ragamala?

At first glance, as you move from picture to picture, stories reveal themselves but seemingly with no correlation: Shiva, a crowned and bearded deity, holds a scull cap and rides a bull; a female stands in beautiful green pasture surrounded by peacocks; a royal figure listens to a musician playing an Indian string instrument alongside a curious dragon. Yet, they all stem from a shared root: the sacred essence of ancient Indian music.

Ragamala paintings are pages from a garland (mala) of visual melodies (ragas). Each page visualises a particular mode (five or more musical tones), and is frequently accompanied by a brief inscription or poem that suggests the time of day, season and even mood of the raga.

The transformation of expression from music, through poetry to painting was a gradual one, most likely stimulated by the invention of paper. Medieval musicians would associate each raga or mode with a deity and name it, perhaps as a means of memorising a melody. Intrigued poets of the late medieval period then personified these ragas and elaborated their tales in vivid verbal imagery. These stories along with other influential musical texts provided the poetic source for ragamala painting.

Gouache heightened with gold on paper, a double-sided leaf, each page with text above the miniature in red and black nast’aliq script on cream paper, red borders, recto numbered in lower border in Persian '207'
recto painting: 25 by 17.5cm.
verso painting: 25 by 17.8cm.
leaf: 36.3 by 26cm.

In 12th 13th century treatise Sangeet Ratnakara we were first introduced to iconography of ragas by identifying them with a deity...Like Raga Bhairava with Shiva but the earliest systematic classification was done in Raga Sagara, written around 1440 A.D. The book classified the entire gamut of melodies into eight Ragas(male) with three raginis (females)each. Then Narada's Panchama Sara Sangraha, gave us the citations of the dhyanas of eight ragas and thirty six raginis in iconography imagery. Around the same time art of miniature was in gaining patronage and artists looking for secular themes found ragamala to be an acceptable theme....the first visual depiction of these melodies are found in the manuscript of the Kalpasutra dated 1475 A.D.

Mita ji, Have you ever seen the ragamala book by Kshemakarna. If yes, Please do let me know the source. I am working on Ragamala painting project. Kind regards,

You may find reference of Kshemakarna's Ragamala, in O C Ganguly's book "Ragas and Raginis"....and in all probability the manuscript can be found in "Sanskrit Manuscript in the library of India office, Catalogue of Sanskrit literature 1881-1904" edited by J Eggeling. You can try Asiatic Society Bengal.

It is very difficult to get response from Asiatic society Kolkata. It is really surprising that a great number of ragamala paintings are based on Kshemakarna's system of classification, yet there is not a single book bearing the sanskrit text of this 15th century musicologist. I know there are two manuscripts available: one in Asiatic Society, Kolkata and other is in the collection of Anup Library, Bikaner. But these are of no use unless they are published.