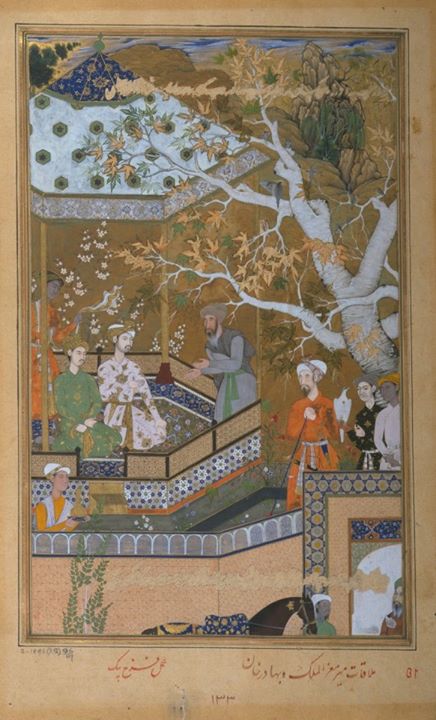 An Interview between the royal emissary Mir Muizzu'l Mulk and the rebel Bahadur Khan. Painting from the Akbarnama, ca. 1590-1595.

The Akbarnama was commissioned by the emperor Akbar as the official chronicle of his reign in 1589 and written in Persian by Abu'l Fazl between 1590 and 1596. The illustrations were done as the author wrote and revised his work and were completed by 1595.After Akbar's death, the manuscript remained in the library of his son, Jehangir. The Victoria and Albert Museum purchased it in 1896 from Mrs Frances Clarke, the widow of Major General Clarke, who had bought it while serving as Commissioner of Oudh in India between 1858 and 1862.

Historical significance: It is thought to be the first illustrated copy of the Akbarnama. It drew upon the expertise of some of the best royal painters of the time, many of whom receive special mention by Abu'l Fazl in the A'in-i-Akbari, the third book of the Akbarnama. The inscriptions in red ink on the bottom of the paintings refer to the artists and indicate that this was a royal copy.

Really good to view this link . THANK YOU

Love his work. My favourite from Akbar's atelier.