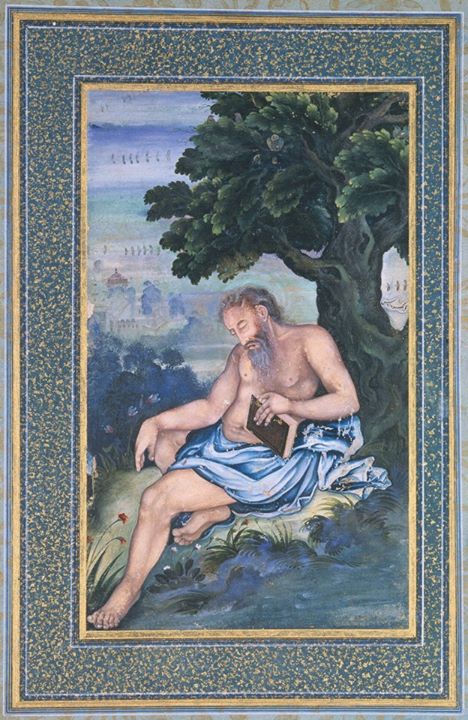 This work, signed “Kesu Das,” was adapted from a European source, in all probability an engraving by Mario Cartaro published in 1564. The wide circulation of European Christian prints in Mughal India in the late sixteenth century proved to be an important source of imagery and of new approaches to pictorial rendering for Mughal painters. Such engravings were assembled into albums at the imperial library. The ultimate source of Keshav Das’s Saint Jerome is Antique Roman imagery of Neptune, their god of the sea. Michelangelo’s drunken Noah in the Sistine Chapel (completed 1512) represents a famous moment in this figure composition’s evolution and a source accessible to Cartaro in Rome some fifty years later. Following Cartaro’s engraving, the Mughal artist merged two sets of European imagery, the drunken Noah in slumber and the studious Saint Jerome holding a book of learning. Das was exploring a painterly technique more akin to European oil painting than to Indian watercolor, and the atmospheric haze of the distant city vista, again a gesture to European conventions, serves to heighten the dreamlike quality of Saint Jerome’s slumber.

© The Metropolitan Museum of Ar

That's a beautiful piece sanjay! The commentary with it is a huge value addition! Thanks for your taste that we are getting a feast of real art!

Very informative on an artistic exploration and effort - making it innovative to the Indian style.