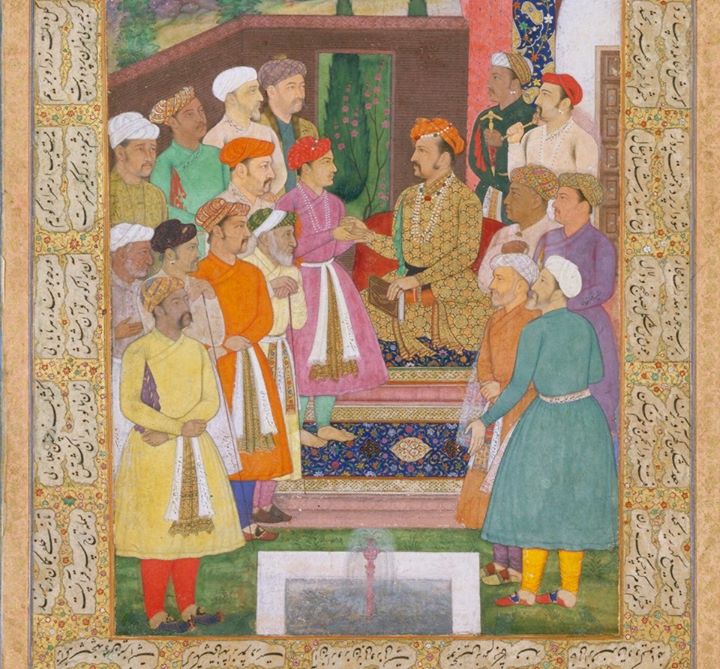 This painting depicts the Mughal emperor Jahangir (r. 1605-1627) seated in a garden, surrounded by leading members of his court, and receiving his son Prince Parviz. Most of the characters are identified by minute inscriptions in Persian, the administrative and cultural language of the court. It is ascribed to the artist Manohar, who was the son of Basawan, a renowned artist of the reign of Jahangir's father, Akbar. Manohar was therefore a "khan-e zad", one of those born into the service of the court, probably in the late 1560s. He came to prominence during the 1580s and 1590s working as a junior artist, sometimes in collaboration with his father. By the reign of Jahangir he was one of the most important artists of the Mughal studio, and produced some of the most famous portraits of the time. The slight imbalance in scale between the different figures in this scene is because each was traced from a single study of the individual concerned, and transferred into the composition, a common feature of court scenes of the period.

The painting was once part of a royal Mughal album, and is part of a group of detached miscellaneous leaves now divided between the V&A and the Chester Beatty Library in Dublin, and known as the "Minto Album", named after a former owner. Two Earls of Minto were appointed Governor-General of India, and it is not known which of them originally acquired the pages.

Absolutely gorgeous! These are national treasures and should be returned to the country of origin.

Manohar, son of another great painter Baswan was active between 1582-c. 1624. He reached artistic maturity in the mid 1590s and contributed solo works to nearly all the finest manuscripts of his time. Initially under the tutelage of his father Baswan, Manohar later incorporated the principles of European perspective in his composition.

Saw some of them at the Chester Beatty Museum. Stunning. Unbelievably beautiful.