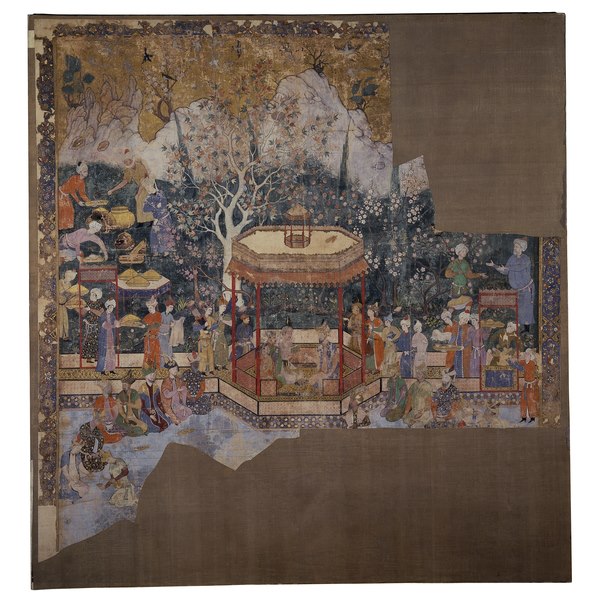 Humayun's garden party, a painting in gouache and gold on cotton

Temporarily ousted from his throne by rebellious forces, Humayun spent the years 1542-45 in exile in Persia, as the guest of the Safavid Shah Tahmasp (reigned 1524-76), before reclaiming his imperial throne in Delhi. Before returning, in 1555, he recruited some of Tahmasp's artists to his service in India. Mir Sayyid cAli, one of the master-painters who accepted his invitation, arrived in Kabul in 1549. He is thought to have executed this painting.

Originally, the painting probably showed Humayun relaxing in a garden pavilion, attended by guests, servants and entertainers. This was a typical subject of royal paintings in Persia. Many of the original figures wear the V-shaped turban which Humayun himself had designed, believing that the number seven (written as V in Arabic numerals) would prove lucky for him.

At least fifty years later, Humayun's grandson, Emperor Jahangir (reigned 1605-27) is thought to have ordered a programme of repainting the scene, transforming it from a simple party to a grand assembly of rulers. The two rows of seated figures in the foreground, originally Humayun's guests, have each been over-painted to represent a particular Mughal or Timurid forebear. Jahangir was always keen to stress that the Mughals were descended from the Timurid dynasty.

Inside the pavilion, the original figures beside Humayun were repainted as Jahangir himself, his father Akbar (reigned 1556-1605), and his son, the future Sh?h Jahan. The two young men standing on either side of the pavilion are Jahangir's two other sons, Khusrau (right) and Parviz (left).

Very small inscriptions on the robes of the over-painted figures ascribe them to particular painters from the group of prominent Mughal artists working in Jahangir's court.

So nice, thank you!