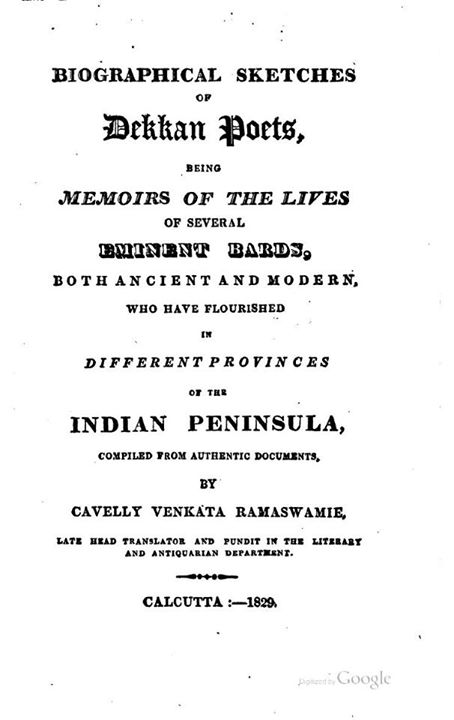 Digital Rare Book:
Biographical Sketches of Dekkan Poets: Being memoirs of the lives of several eminent Bards, both ancient and modern, who have flourished in different Provinces in the Indian Peninsula
By Cavelly Venkata Ramaswamie
Published in Calcutta - 1829

The third of the Kavali brothers (Miscellany June 15 and July 6) was not exactly a favourite of Colin Meckenzie, though he did employ Ramaswami and kept him on the rolls of the Survey Department as a translator. Ramaswami spent a considerable amount of time with his brother Lakshmaiah in Calcutta and appears to have then spent time in Bombay before returning to Madras. He had, from 1825, published books from all three port cities. He was, in fact, the most prolific writer of the three.

Sixty years before Edgar Thurston and Rangachari’s classic Castes and Tribes of South India (1909), Ramaswami had published Castes of Southern India (1847). This work, for many years considered a path-breaking Indian contribution to sociology, was one more example of his diverse interests. He had in 1835 published in Madras a Telugu translation of a Sanskrit work on Ayurveda. The next year, he published a cookery book, an English translation of a Telugu book of recipes by Saraswatibai, who was from a zamindari family from the Northern Circars (now northern Andhra Pradesh). The Telugu title was Supasatra or Pakasastra. Then came Letters from Madras during the Years 1836 to 1839 by a Lady.

By the time these works appeared, Ramaswami appears to have made a name for himself. In 1828, there appeared his Descriptive and Historical Sketches of Cities and Places in the Dekkan. This was one of the earliest books by an Indian author looking at locations in a geographical area from a Western viewpoint. It was, however, the next year that Ramaswami made his literary mark when his Biographical Sketches of the Dekkan Poets appeared. It was this book that had him assessed as “the earliest Indian writer in English” to attempt even a partial history of Indian Literature, and, in the process, produce a book which also had a strong element of comparative literature about it.

The first edition of Dekkan Poets was published from Calcutta in 1829. A second edition was published from Bombay in 1847. By dedicating the former to Lord William Bentinck, the Governor General, and the unchanged latter to the Chief Justice of Bombay he rather blotted his copybook. He gained a reputation not only for duplicity but also for trying to constantly ingratiate himself with the powerful.

In the Biographical Sketches, Ramaswami narrates the stories of 17 Sanskrit, 46 Telugu, 13 Tamil and 12 Maharashtrian poets. How many of them belonged to the Deccan or lived there I have no idea, but Ramaswami seems to have spread a wide net.

The book also contains a literary sketch of his eldest brother Boraiah, whose Lives of Telugu Poets undoubtedly inspired Ramaswami to follow in his footsteps but, at the same time, blaze a new trail, pioneering literary analysis in Indian writing in English. As part of this exercise, Ramaswami’s preface to the book looks at Sanskrit, Tamil, Telugu, Kannada and Malayalam literature. With this work, Ramaswami was not merely examining pan-Indian literature but was taking a world view of it as a consequence of his interaction with Mackenzie and other Europeans as well as with Raja Rammohan Roy and his Brahmo Samajists.

Pages 154 and 155 seem to be missing. It will be interesting to get to see some of the work of the poets mentioned in this book. I found the brief on Gnanoba (Dnyandev) intriguing for Mr. Ramaswamie mentions Changdev as Gnaoba's brother. Dnyaneshwar had two brothers and one sister. The two brothers were Sopan and Nivritti. The sister was Mukta. Changdev was a venerable yogi of the established order and possessed extraordinary prowess. On hearing about the growing reputation of Gnanoba and his siblings Changdev wanted to engage him in a debate. To impress the youngsters, he rode a tiger and wielded a cobra as a whip. When he reached Gnanoba's hut, he found the children sitting on a wall dangling their feet and chewing sugar cane. Gnanoba sensed the intent of the yogi and asked the yogi to stay where he was as it was impolite to have the great man walk up to him. He then ordered the wall to walk towards Changdev. Thus the yogi was humbled that a mere child was able to make an inanimate object walk. It is likely that these brief sketches are erroneous in many places. Yet the book definitely highlights the literary prowess of the people of Deccan. Only Shankarachari seems to be out of place in the comependium.