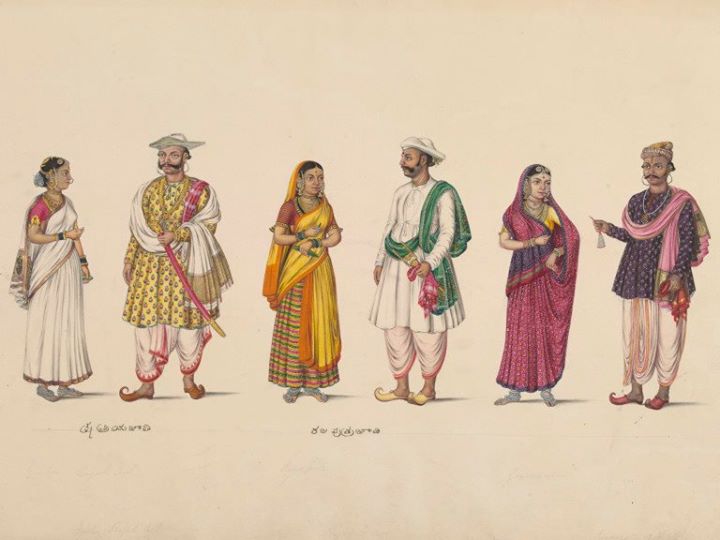 Gujrati ? Or vanik? Script looks like kannada or telugu.

It's Kannada .. I can read first script as Kshatriya Jathi !!

And second script as Rajput Jathi

What is gouache? Do painters use it still? Sanjeev Khandekar may perhaps tell us.

Gouache paint is similar to watercolor but modified to make it opaque. A binding agent, usually gum arabic, is present, just as in watercolor. Gouache differs from watercolor in that the particles are larger, the ratio of pigment to water is much higher, and an additional, inert, white pigment such as chalk is also present. This makes gouache heavier and more opaque, with greater reflective qualities.[1] Gouache generally dries to a different value than it appears when wet (lighter tones generally dry darker, while darker tones tend to dry lighter), which can make it difficult to match colors over multiple painting sessions. Its quick coverage and total hiding power mean that gouache lends itself to more direct painting techniques than watercolor.[2] "En plein air" paintings take advantage of this, as do works of J.M.W. Turner and Victor Lensner. It is used most consistently by commercial artists for works such as posters, illustrations, comics, and for other design work. For example, comics illustrators like Alex Ross use mostly gouache for their work. Industrial Designer and Visual Futurist Syd Mead also works primarily in gouache. Most 20th-century animations used it to create an opaque color on a cel with watercolor paint used for backgrounds, and gouache as "poster paint" is desirable for its speed and durability. As with all types of paint, gouache has been used on some unusual papers or surfaces. Read more: http://en.wikipedia.org/wiki/Gouache

Calling all Indian men! Puhleassse wear your native costumes - do you have *any* idea how cool your paunches/beer bellies/flabby chests look in ANY Indian costume? Signed, One Disgruntled Girl