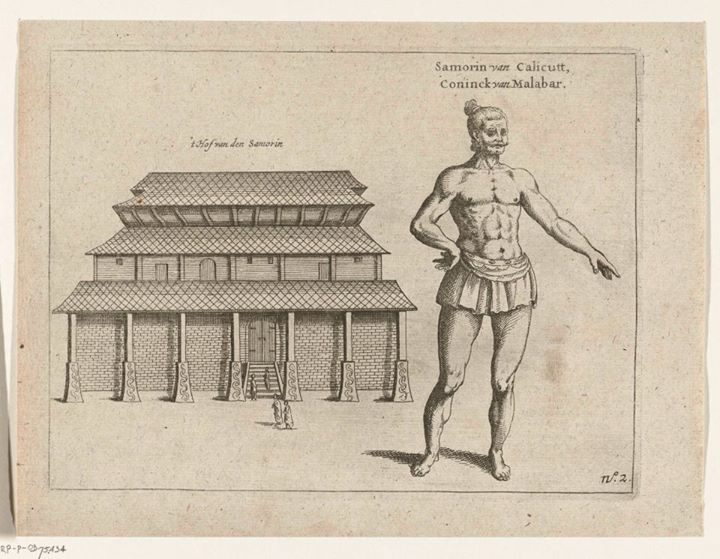 The Zamorin of Calicut, King of Malabar, standing before the palace of the king. The Dutch had on 8 November 1604 a meeting with the king. Part of the illustrations in the report of the second voyage to the East Indies for the VOC under Steven van der Hagen, 1603-1608, no. 2.

:D A lovely tale about one of the Zamorins. The Portuguese wanted to take some pepper plants to their country and grow the spice their. The court was outraged. The wealth of Calicut was owed to pepper plantations. And the Zamorin calmly said, 'Take it with pleasure. How do you intend to cargo our rains?'

ah, interesting - despite the clearly senior face, the king seems well-built, with a six-pack, and strong powerful legs. lets hope there were no photoshopping kinda methods in those days :D

The cloth He wore is not in Indian or Kerala ( Calicut ) methode. It may be imaginary work.

The one who saw the king must have explained the attire (mundu) as "something like a skirt" and the artist took his liberty to make it a miniskirt I guess!!! It is certainly imaginary since the building in the background does not portray the typical symmetry found in Kerala Architecture.