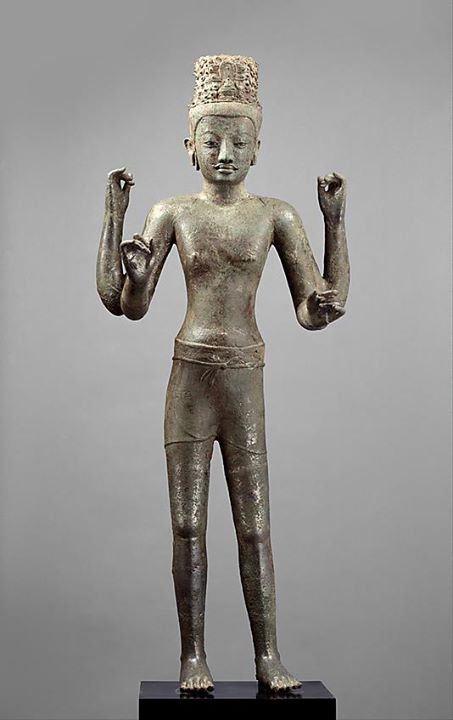 In the Buddhist pantheon, the Bodhisattva Avalokiteshvara is revered as the personification of compassion. He is almost always identified through the depiction of his "spiritual father," the Buddha Amitabha, seated in his hair. In Southeast Asia, perhaps during the sixth or seventh century, there developed, quite independently of Indian religion, a cult specifically devoted to the four-armed Avalokiteshvara as well as to the four-armed messianic Bodhisattva Maitreya. Both figures are well represented in the famous hoard of bronzes found in 1964 at Prakhon Chai in eastern Thailand, from which this large and splendid four-armed Avalokiteshvara came. The silvery sheen on the surface of this sculpture derives from the high tin content used in the making of Prakhon Chai bronzes. The use of silver and obsidian inlay for the eyes is also typical. Avalokiteshvara stands in a frontal position with a slight shift of weight to his left leg. He wears a short wrap-around garment tied at his waist with a rope, and his long hair is pulled back from the forehead and arranged in a topknot of multiple loops. Avalokiteshvara's skimpy clothing and lack of jewelry distinguish this representation of the bodhisattva from the more traditional regal images found throughout Asia. Ascetic bodhisattvas predominate at Prakhon Chai, possibly reflecting the spread throughout the region of early Esoteric Buddhism at that time.

In Mahayana Buddhism, Avalokiteshvara is worshipped as a Dhyani Bodhisattva who guards sentient beings across their temporal existence in the present world, and hence receives popular attention. He anticipates the appearance of the future Buddha, Maitreya, to teach his doctrine of Dharma. In art, Avalokiteshvara is depicted as Padmapani, with a lotus in hand (perhaps separated from the above figure), either guarding over a Buddha, as in Ellora, or as the sole object of worship. The Dalai Lama of Tibet is said to be a personification of him. The austere depiction above contrasts with that of much flourish depicted here: http://archive.org/stream/cu31924016181798#page/n71/mode/2up