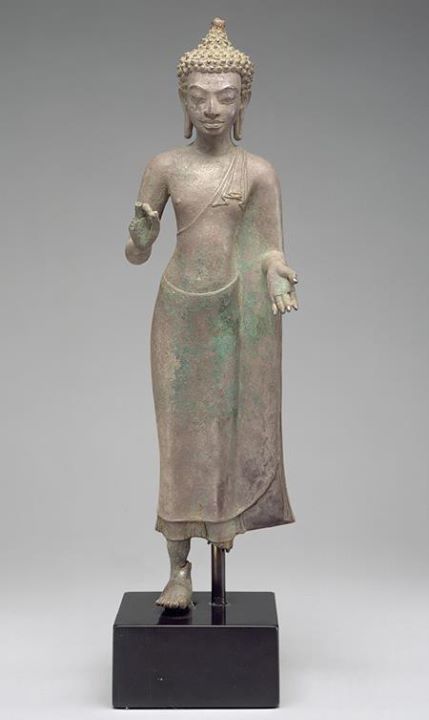 Essay:
The Mon-Dvaravati Tradition of Early North-Central Thailand
By Kurt Behrendt
Department of Asian Art, The Metropolitan Museum of Art

Between the seventh and ninth centuries, multiple competing kingdoms emerged in central Thailand and it is at this time that the earliest Buddhist and Hindu sculptures first appear in this region. For a time, the Dvaravati rulers in the central Thai city of Nakhon Pathom maintained power and many scholars have used their name to characterize this period and a people who spoke the Mon language. Unlike the Pre-Angkorian kingdoms of the Mekong delta that were linked to China and India by an international trade network, central Thailand remained relatively isolated. As a result, a distinct and highly sophisticated Mon-Dvaravati style emerged. Buddhism appears to have been the major religion, but the presence of Hinduism is well attested by monumental lingas found throughout the region and images dedicated to Vishnu. By the eighth century, Mahayana and Esoteric Buddhism had begun to take hold in the area of the Korat plateau; especially notable are the many multi-armed bronze bodhisattvas found near the town of Prakhon Chai.

An intriguing site is that of Si Thep, which sits along the Pasak River in central Thailand. The center was already active in the sixth century and its occupation lasted until the thirteenth century. The earliest images are Hindu, a group that can be stylistically related to Pre-Angkorian sculpture such as that found at Prasat Andet. However, characteristics such as the faceted miter sitting high on the forehead make Si Thep production readily distinguishable and the facial features, especially the eyes, relate to the emerging Dvaravati style. During the seventh and eighth centuries, monumental lingas such as one from Si Thep were found throughout Thailand. Kings who identified themselves as incarnations of Shiva would establish such lingas as a religious act and as a symbol of their power over a newly conquered territory. Ideas of perfect geometry help relate the octagonal base to the cardinal and intermediate directions, while the circular pillar is implicitly the cosmic axis. Here, the face of Shiva provides a focus for veneration; he is readily recognized by the crescent in his hair and vertical third eye. In contrast, the Si Thep Buddhist imagery is more closely related to the production of the Mon-Dvaravati period, as can be seen in a rare gold repoussé representation of the Bodhisattva Avalokiteshvara.

By the seventh and eighth centuries, a characteristic Mon-Dvaravati Buddha type had emerged that, once established, would have a major impact on sculptural production across central Thailand. The Buddha stands with his right shoulder uncovered; while his garments are clearly visible, their smooth understated treatment draws attention to his idealized physical form, which functions as a metaphor of enlightenment. The Buddha has a rather broad face, full rimmed lips, elongated eyes, and eyebrows joined in a sharp ridge that forms an arc with a triple curve. In Thailand during this period, stupas (relic mounds) and temples often were embellished with terracotta and stucco sculptures. In contrast to the stone and metal images that served as the primary objects of worship, these embellishing sculptures executed in plastic media show a greater degree of spontaneity and freedom of expression.

Considerable innovation in religious iconography occurred during the Mon-Dvaravati period. It is only during this period that we find Buddhas holding both of their hands in a gesture of exposition or teaching (vitarkamudra) that in India is confined to the right hand. Mon-Dvaravati iconographic developments clearly impacted Burmese sculptural production. A good example is a seated Buddha that was manufactured in the Pyu region of central west Burma. Like the Mon-Dvaravati images, it originally held both hands in the teaching gesture. The Pyu kingdom flourished in central and northern Burma from the early years A.D. to around 832, when Halin, the capital, was sacked by forces of the southern Chinese Nanzhao kingdom. The sculpture in this area displays a fluidity of modeling with an emphasis on soft flowing volumes rather than the linear development of forms that is seen in the best early Southeast Asian sculpture.

During the Mon-Dvaravati period, a great number of clay or terracotta plaques were produced at Buddhist sites across Thailand. The manufacture of such plaques from sacred earth is a tradition that originated at major pilgrimage sites in the Ganges River basin of India, where the Buddha lived. As the actual act of stamping an image of the Buddha generated great merit, the manufacture of such images took hold in Southeast Asia and other parts of the Buddhist world. The subject matter of plaques produced during the seventh to ninth centuries are mainly related to events in the Buddha's life. With the establishment of Mahayana Buddhism, the iconography of the plaques changed and many show the Buddha flanked by bodhisattvas.

A large group of bronze Buddhas and bodhisattvas, perhaps hidden during a period of political disruption, were found buried together in eastern Thailand near the town of Prakhon Chai. These bronzes are unlike any other images produced in the major artistic centers of Thailand. They date from the seventh to ninth centuries and exhibit significant stylistic diversity, suggesting that they were collected from a range of sites rather than being the product of one manufacturing center. Since then, related images have been discovered in the vicinity. Ascetic bodhisattvas predominate in this corpus, possibly reflecting the early spread of Esoteric or Mahayana Buddhism in the region. Supporting this interpretation is the fact that most of the bodhisattvas are multi-armed, wear simple clothing, and generally lack jewelry. The silvery sheen on the surface of many of these sculptures derives from the high tin content used in their casting. Silver and obsidian inlay for the eyes of the larger images is typical.

By the tenth century, the disparate Mon-Dvaravati traditions began to come under the influence of the Khmers and central Thailand was ultimately invaded by the Khmer king Suryavarman II in the first half of the twelfth century.

This Buddha is a fine example of the style of sculptures created from the seventh through the ninth century by the Mon people of central and southern Thailand. The Buddha stands in a hipshot posture with the weight of his body on the right leg; the left leg, positioned slightly forward, displays just a hint of a bend at the knee. He wears the traditional monastic garments, which in this case are arranged to leave the right shoulder bare, and to adhere tightly to the body.

The left hand makes an approximation of the boon-bestowing gesture. Judging from the remaining fingers, the right hand would have been in the teaching gesture often seen on Mon Buddhas.

Along with the very refined modeling, there is a high level of precision in depicting the curls of the hair, the facial features, and the drapery details. The serene expression, animated by the compelling gaze, the fine modeling of the features, and the crispness of the surface detailing unite to form an unusually beautiful face.

Much similar to Indian traditional attire!!