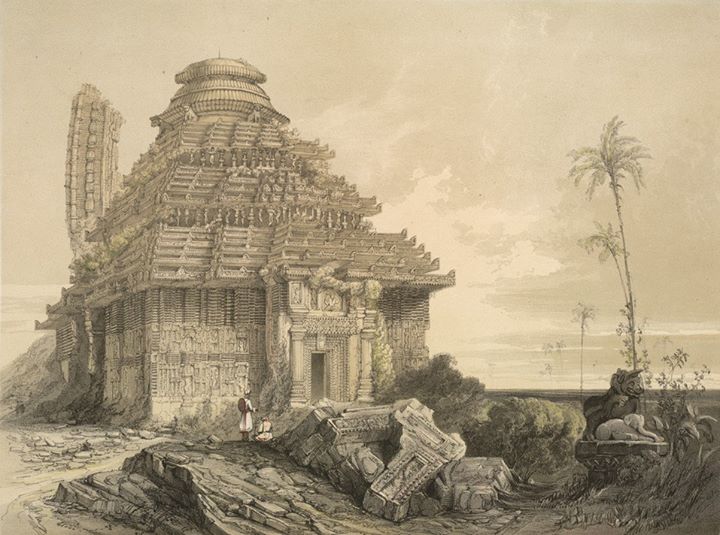 This is plate 3 from James Fergusson's 'Ancient Architecture in Hindoostan'. The sun temple at Konarak is one of the most famous of all India's temples, and considered a supreme achievement of Oriya architecture. Europeans in Fergusson's time knew it as the Black Pagoda, a reference to deserted sites that locals described as kala, meaning empty.

The structure was designed to represent the sun god Surya's chariot, pulled by seven horses, with its 24 wheels decorated with symbolic designs. Believed to have been built in the mid-13th century by Narasimhadeva of the Eastern Ganga dynasty, the temple lapsed into ruin when the 227 feet high main tower, collapsed. The exterior is richly decorated with sculpture, some of which dismayed Fergusson by its "obscenity". Nonetheless, he admired it; writing: "There is altogether so much consonance in the parts and appropriateness in the details, that the effect of the whole is particularly charming."

India should not have forgotten Fergusson..its sad they hv except few learned circles..who just drop his names in air-conditioned seminar halls

Beautiful architecture. Can anyone from that area tell what's left of it now ? Any link with pics ?

AmaaaaaaaaaaaaZing.... Is There Any Ruin Is Left????

Its one of the finest archtecture I have ever seen !

I hear that there was a giant magnet on top and because of the stones has some metal in it it did hold the whole structure together! After the muslims blow up the temple the british took the magnet so it finaly started to crumble apart. Now it is World Heritage site! Thanks God! It did probably looked like the Puri temple!

@Haroon Jalil , a simple google search wil give you what you're looking for.

Tradícionális India, no, it didnot look like the puri temple. If you notice closely, the architectural designs (shapes) are very different.

The temple actually had a huge maghetic stone in the foundations and another one at the top. Because of the magnetic force of both of the stones, the sun God's idol made of ashtadhaatu actually floated mid-air in the sanctum sanctorum.

The Sun Temple was built, akin to similar efforts in the Vijayanagara and Nayaka kingdoms, to mark a victory over Muslim aggression. The ascetic practice of Buddhism has always been limited to its monastic order, and wide acceptance of it could not have been a general threat (though, down south, the persecutions of Jains did occur in the later centuries by the Pandyas). Moreover, work of amorous intent was a part of Buddhist artistic expression. Hinduism is uniquely distuingshied from several other religions by its heavy emphasis on sociological application of philosophy, that is, efforts to organise society so as to draw humanity to the ultimate goals of life as preached by its saints. This is almost exclusively intended for that section, invariaby the most numerous, who are not yet weary of the outward path of life, that is, the path of Self-Assertion characterised by worldly pursuis. Those further ahead on this path, already satiated with the sensory world, enter an inward movement of Self-Realzation and are prescribed ascetic codes. Hinduism seeks to goven the material(Artha) and sensory(Kama) worlds of the Self-Assertive masses by social codes, called Purusharthas, subject to the moral law of Dharma that seeks to protect the weak from the strong. These are explicated in the respective popular shastras (or sutras) of Kautilya, Vatsayana and the epics. Since temples and other places of worship are designed to represent such a cosmos, due attention is given to the representation of each of these three components. The amorous elements, notably the maithunas and references to sexual congress, suggest the spiritual joy of Kama, and not passion or lust which are among those emotions listed as the enemies of man. The Konark Temple is second only to the complex at Khajuraho in the popularity of such depictions.

haroon jalil u can c it on my pro pix.

tradicionalis India u r right about that magnet..

>> What Fergusson tagged as obscenity As I said before, one can not expect some one like Fergussan coming from his value system to be able to appreciate India in significant manner. Some limitations are to be expected.

The black pahoda,wonderful peace of the earth.

I feel proud to be an odiya When ever I see the traces of excellence,like this, of our forefathers.

nice to see our earlier Konark

The Sun Temple of Konarak is the identification of Odisha's architect. Really Amazing