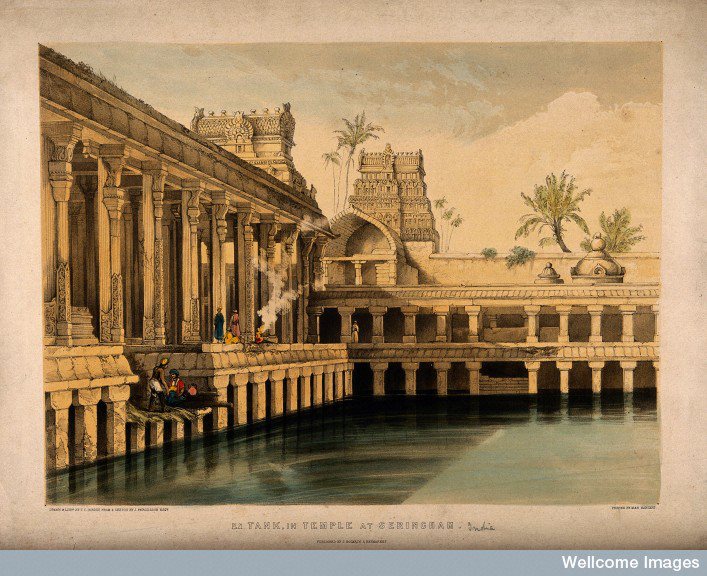 This place is Tiruvanaikovil (jambukeshwaram ) (pincode :- 620005)near srirangam.in Trichy dist. in Tamilndau. and this is the temple pond.. (sooriya theertham) by the way i live near by..i have even more old pictures of this place.. http://goo.gl/maps/xWg46

Which year was this painting ?

This is thiruvanaikovil. The gopuram is one of the few in tamilnadu built in hoysala style.

According to Wikipedia, the temple is 1800 years old. Amazing architecture....

Abhinava Bhattacharyya dude back in the day india looked waaaaaay betta than it is now. i mean seriously, like something out of a fairytale..

Hello Ms. Ullal. The earliest architectural forms in stone in South India dates from 700 AD., with the Shore Temple being the first structural one. Thus, this temple is unlikely to be older than that date. Temples in Srirangam have the Vijayanagar influence and hence should date to after their time.

Thanks Shashi - have to check out the Shore temple now! What's a credible website for this kind of information?

Hello Ms. Ullal. I refer to J C Harle's works offline. I'm not sure if there are websites that list out the dates and styles chronologically. I'll pass them on when I find them.

the temple predates adi shankara. It obviously wasn't in this form then. The hoysala influence is a later addition.

Hello Mr. Narayanan. Since this temple is associated with Shankaracharya, I assume it is a Shaivite one. The lofty gopurams, hypostyle halls and composite support for pillars as shown in the above picture indicate Pandyan or Nayak patronage, which indirectly link to the Hoysalas through the Vijayanagar kingdom, rather than direct Hoysala influence. Moreover, the imprint of the Nayaks are well known on the other temple in the region, the one of Ranganathaswamy. Since no Hindu architectural elements survive prior to the 8 century in the South, elements of this temple date further, but the locations themselves were no doubt sanctified by Vishnavite and Shaivite litreature, thus dating them theoretically to an earlier age.

It is one of the 5 temples of Shiva dedicated to the elements. 4 of these are in Tamilnadu while one is in kalahasthi in present day Andhra Pradesh. This temple represents Shiva in the form of water. Legend states that water seeps into the sanctum and it is not completely far fetched considering that the Cauvery flows (or used to) close to the temple. As for Hindu architectural elements prior to the eight century, the earliest I know is or the magnificent cameo on the walls of the Trichy Rockfort which has been dated to earlier than the eighth century. this predates the shore temple and the Kailasanathar temple at kanchi (i think) and is of pallava origin. the sculpture stands next to a Jaina resting place. Admittedly this is rock cut but is simply fabulous.

Hello Mr. Narayanan. Thank you for the information. Regarding the rock cut cave in Trichy, I assume reference is being made to the Shiva Gangadhara cave. This same has been dated to the 7th or 8th century. The relatively delayed emergence of such architecture in the South is indeed a mystery, when Buddhist remains up North in Andhra predate them by 700 years. Perhaps the tradition of construction using perishable materials carried on to a much later date in these areas.

Sashi - It is a mystery indeed. There is a period of South Indian history of which very little is written in terms of the art it produced. The period from the 2nd or third century AD till the Pallavas took over. The history books called the rulers (The Kalabhiras) artless and there is nothing much to show in terms of sculptures of a religious nature for their tenure. South Tamilnadu has many cave sculptures of Tirthankara's but I am not sure of the era to which these belong. Also, I've read that the Tamil's preferred stone sculptural art only from the 6th century onwards. I don't know if there is link to that and no visible stone images being produced by the Kalabhiras. However, there does exist a vast work of Tamil literature (mainly buddhist or Jaina) from this period.