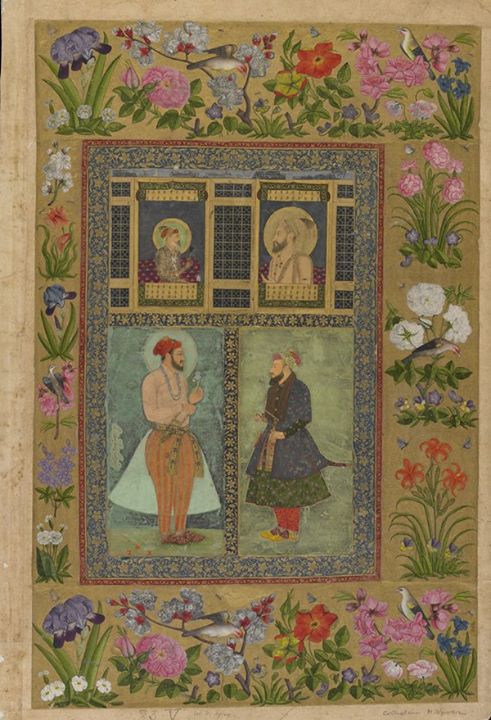 The four portraits included here represent the fifth emperor Shahjahan (reigned 1628-58; upper left), and his sons Emperor Aurangzeb (reigned 1658-1707; upper right) and Dara Shikoh (reigned 1615-59), who is identified and dated by the inscription (lower left). The man on the lower right is not identified.
The last years of Shahjahan's reign were marked by bitter dynastic struggles among his sons for succession to the throne. After annihilating his brothers and imprisoning his father, Aurangzeb prevailed. An austere administrator and a religious and cultural puritan who had little interest in the art that had so pleased his father, Aurangzeb almost completely abandoned the tradition of imperial patronage. His reign is generally regarded as the beginning of the decline of the Mughal empire.

The so-called St. Petersburg Album, named after the Russian city where the majority of the album is kept today, was assembled in Iran around 1750. In the eighteenth century, it was set in elaborately designed borders, replete with naturalistic floral sprays, birds, and insects, which in turn may have been inspired by earlier Mughal models. Several of these borders are signed by the painter Muhammad Hadi. The overall visual effect of these folios, even if somewhat incongruous, is one of heightened opulence and sumptuousness.

Sir, I do not know who you are but I cannot thank you enough for enlightening me with so much information that you share on this page.

Thanks for sharing this valuable collection of Aurungzeb letters. Can you please share the book 'History of Aurangzeb" by Sir Jadunath Sarkar. It is in five volumes. I have got two volumes in PDF format and looking for the rest. Thanks

so much of original work available for Aurangzeb's reign