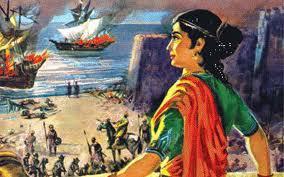 Little is written about the valiant Queen of Ullal in the history books. In her infallible bravery and indefatigability she is in par with legendary Rani Laxmi Bai of Jhansi and Rani Chennamma of Kittur, who fought the British in the 19th century. Like them she fought imperial foreigners gallantly and roused her forces to do the same. People of all faiths responded to her call, with the common goal of preserving motherland and defeating the invaders. Rani Abbakka Devi was the only woman in history to confront and fight the Portuguese, handing them defeat repeatedly, thus foiling their designs for supremacy of the Western Indian coast. When the Portuguese tried to exact the tax (known as ‘kappa’), the Queen, incensed and exasperated, refused to pay. Thus began her heroic battles for freedom and honor. Yet, she is rarely mentioned in history, and her accounts of her encounters with the Portuguese are mired in ambiguity.

And I mean epic in the actual sense, not the internet sense.

The book i read by Pietro Del Valle does mention her but the article says he may have mistaken the wrong Abbakka Devi, he did sit down and have lunch with one Abbaka devi the Queen of Ullal. So I wonder who really has the wrong dates.

In Karnataka, she is very well known.

If am not wrong, the picture of the Rani here is the cover picture of ACK's Famous Queens comic.

I have this ACK and read it years ago when I was only 11 or 12. Glad I still preserved all my old ACKs, want to pass off these gems to my kids.

Sumer >> I had this ACK too (heck I had the whole lot) --> Unfortunately gave them away when going to college. Regret that a lot now.