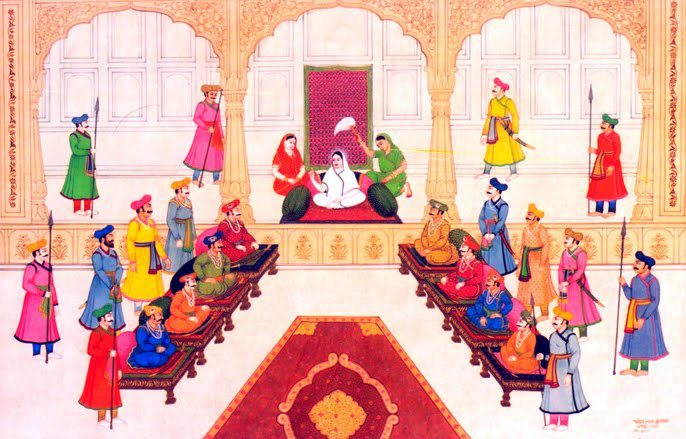 India has had many female rulers, warrior women and poet queens, but Ahilyabai Holkar commands more affection and respect for her accomplishments during her 30-year-long reign than any other does. She was noted for her piety, for her administrative ability, for her keen interest in all her people and for an extraordinary amount of building at holy sites all over the country. Her rule of Malwa in the 18th century is still cited as a model of benevolent and effective government.

Ahilyabai was born in 1725 in the village of Chondi, in Bhid district, Maharashtra. Her father, Mankoji Shinde, was the patil of the village, a member of the proud Dhangar community. Women then did not go to school, but Ahilyabai’s father taught her to read and write. Her mother also seems to have been a well-read and pious woman.
Her entrance on to the stage of history was something of an accident: Malhar Rao Holkar, a commander in the service of the Peshwa Bajirao and lord of the Malwa territory, stopped in Chondi on his way to Pune and, according to legend, saw the eight-year-old Ahilyabai at the temple service in the village. Recognising her piety and her character, he brought the girl to the Holkar territory as a bride for his weak son, Khande Rao.

Ahilyabai’s husband was killed in battle in 1754. Twelve years later, her father-in-law, Malhar Rao died. From 1766 until her death in 1795, she ruled Malwa, trained in both administrative and military matters by Malhar Rao. A letter to her from Malhar Rao in 1765 illustrates the trust he had in her ability during the tempestuous battle for power in the 18th century:

"Proceed to Gwalior after crossing the Chambal. You may halt there for four or five days. You should keep your big artillery and arrangeforits ammunition as much as possible….On the march you should arrange for military posts being located for protection of the road."
Already trained to be a ruler, Ahilyabai petitioned the Peshwa after Malhar’s death, and the death of her son, to take over the administration herself. Some in Malwa objected to her assumption of rule, but the army of Holkar was enthusiastic about her leadership. She had led them in person, with four bows and quivers of arrows fitted to the corners of the howdah of her favourite elephant. The Peshwa granted permission, and, with Tukoji Holkar (not a relative) as the head of military matters, she proceeded to rule Malwa in a most enlightened manner, even reinstating a Brahmin who had opposed her.

Ahilyabai never observed purdah but held daily public audience and was always accessible to anyone who needed her ear. The administrator and historian, Sir John Malcolm wrote most enthusiastically about her abilities some 40 years after her death:

"Her first principle of government appears to have been moderate assessment, and an almost sacred respect for the native rights of village officers and proprietors of land. She heard every complaint in person; and although she continually referred cases to courts of equity and arbitration, and to her ministers for settlement, she was always accessible. So strong was her sense of duty on all points connected with the distribution of justice, that she is represented as not only patient but unwearied in the investigation of the most insignificant cases, when appeals were made to her decision."

Great queen.she was! Salute her.

"a woman ruler during that era is indeed noteworthy !'

Wonderful woman! There was another great woman from Ullal, Mangalore. Her name was Rani Abakka and she and her two daughters fought and defeated the Portuguese navy, twice. The third time her husband, whom she was separated from, betrayed her and she was defeated and killed by the Portuguese.