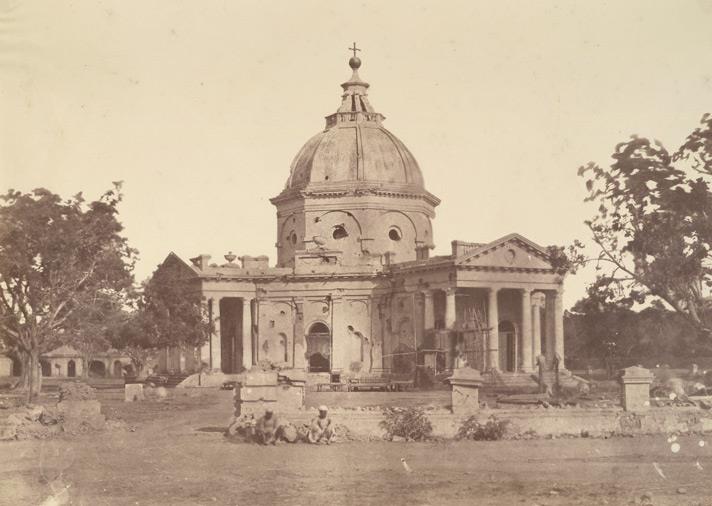 Photograph of St. James's Church in Delhi from 'Murray Collection: Views in Delhi, Cawnpore, Allahabad and Benares' taken by Dr. John Murray in 1858 after the Uprising of 1857. St James Church was commissioned by Colonel Skinner (1778-1841), a distinguished military officer, famous for the cavalry regiment Skinner’s Horse, known as the Yellow Boys because of the colour of their uniform. While lying wounded on the field of battle he made a vow that if he survived he would build a church in thanks for his life being saved. The church was started in 1826 and completed ten years later. During the Uprising of 1857 the Chruch was damaged by shellfire. The dome of the chruch is topped by a copper ball and cross, which was used by sepoys in 1857 for target practice.

I'm pretty sure I've been to a service there when I was a kid. Unless I'm confusing the one that is on or near the old St. Stephens campus in Old Delhi with the church near the Parliament and Rashtrapati Bhavan?

John Murray, a doctor in the Indian Medical Service - Bengal, was one of the foremost amateur practitioners of photography from the 1840s. Many of his pre-Mutiny photographs of monuments that were involved in those events were published in the London papers during the times. He is known for his work in Agra and helped put across a real picture to the literary one painted by Fanny Parkes of the "Mootee Masjid", then considered second only to the Taj Mahal, in her popular travelogues.

No -this Church is in Kshmiri Gate Area, the one near Lok Sabha is newly built with New Delhi

I visited the church during my visit to Delhi last summer. Next to the church are the graves of Skinner and his several wives. Nearby is Nicholson cemetery with graves of many British officers killed during the battle for Delhi in 1857