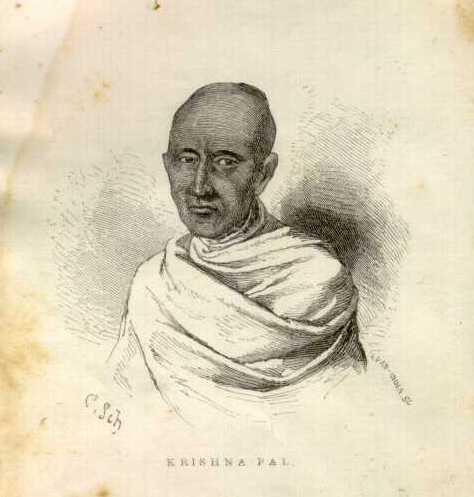 Digital Rare Book:
The First Hindoo Convert: A Memoir of Krishna Pal, a Preacher of the Gospel to his countrymen more than twenty years.
Published by The American Baptist Publication Society, Philadelphia - 1852

An example of a contemporary but converse trend is that of Charles "Hindoo" Stuart of the EIC army, well documented by William Dalrymple in "White Mughals". Even his tomb at the Park Street Cemetery in Calcutta is Hindu in style.

As ususal a rare case of conversion..very interesting and gripping to the core.R.b.s.i.thanksfor the download.

Is it with him that conversion started in India?

Such archaeic colonial and religious attitudes. Very interesting book. Thank goodness we are in a more atheistic world than ever before !

Mohan, no - the Portuguese had already had their version of the Inquisition in Goa, where forcible conversions rendered a huge percentage of the population Catholic.

Mr Kolar - To suggest that the conversion of Charles Stuart to Hindusim was representative of a wider ' trend ' amongst the Anglo-Indian community of the early nineteenth century is - might I say - a considerable overstatement of the truth. Stuart and the handful of other E.I.C. officers like him (Ochterlony et al) - who ' went native ' (as they say) and completely embraced local Indian customs and culture - comprised the tiniest fraction of the British community on the sub-continent at that time. A community that was itself very, very small indeed - a few thousand in number, no more. These men were considered by the majority of their own countrymen to be simply eccentric at best - downright decadent and immoral at worst. The belief that most Englishmen (or Scotsmen or Welshmen !) in India prior to about 1830 were all ' enlightened' pajama clad, opium smoking, embodiments of multi-cultural values is, in good measure, a mythology created by the popularity of Mr Dalrymple's historical novels. Of course, conversion rates ' travelling ' in the opposite direction (i.e. from Hindu or Muslim to Christian) have been equally over dramatised - the numbers involved were, again, very small. It is not widely recalled that it was only after 1813 that the E.I.C. (under pressure from the British government) allowed Christian missionaries to opertate freely upon the sub-continent. Prior to that date their activities had been actively discouraged and heavily restricted.

I forgot to mention that one of Jesus' disciples, Thomas, arrived in India in the first century AD. He is buried near Chennai at Mount St. Thomas.

How can he be the first Hindu convert? As someone else has pointed out, conversions are as old as st. Thomas. Probably earlier than anyone in the west was "converted".

Vinita is right, Krishna Pal, a Bengali became Christian in 1800 , before that many in India, at Goa. Earliest recorded was in Cranganor Kerala where in year 800 Armenian Christian Thomas Cananeus established a Church(Armenia was first Christian State in World) - Carey's first Hindu to convert was Krishna Pal, thirty-six, at baptism, born in the neighbouring French settlement of Chandernagore, had settled in the suburbs of Serampore, where he worked as a carpenter. Sore sickness, poverty and a sense of sin led him to join the Kharta-bhojas, one of the sects which existed from the time of Buddha, For sixteen years Keshto Pal had acted a Guru of Ghospara sect, He recovered from sickness, but could not shake off the sense of the burden when he decided to convert. This was most horrible news to people, that a Hindu had "become Christian , Krishna Pal , his wife, wife's sister, his four daughters; Gokul, his wife, and a widow of forty who lived with him, were the first group of Christian converts.

For heaven's sake (pardon the pun) ... Krishna Pal was William Carey's " First Hindoo Convert " i.e. the first to become a Christian under his direct auspices c. 1800 ... and a Baptist at that - not a Roman Catholic or a member of any other sect or denomination. He was not the " First Hindoo Convert " to Christianity in the long history of the sub-continent ... Perhaps reading the book itself might shed further light on the matter...

You are probably right Julian. Also, there is no concept of conversion to Hinduism. You can live the "Hindoo" life any way you want, Atheism included. One of my earliest childhood memories is of my grandparents house in Trichy, where, among the pantheon of pictures of Hindu gods was one of Jesus, solemnly garlanded and annoited with a red vermillion paste every Friday.

Re: " ... there is no concept of conversion to Hinduism." On this matter, you would know better than I, Mr Narayanan. However, in terms of the title of the book, you must make some allowances for the Anglocentric phraseology...

Hello Mr. Craig. Thank you for your comment. I wasn't alluding to popular absorption of Europeans into mainstream Hinduism, itself fraught with many institutional difficulties like the caste they would need to belong to, prospects of marriage etc. The gulf between such institutions on both sides and their respective characters precluded this. What I was suggesting was the higher degree of social intercourse between the two peoples in the 18th century, due to the flexibility of the British character when the country was not yet the dominant power of Europe - which later hardened into insular race consciousness especially after the Napoleonic wars - and due to official policy which encouraged EIC servants to form alliances with the natives to avoid costs of shipping spouses from the West. Such a policy led to a considerable burgeoning of Anglo-Indians, often derogatorily called "half-castes" which put them out of the mercies of the natives. It's only when the official policy was changed to restrict commissions to these Anglo-Indians - largely due to them being numerically superior to the Whites, which the Directors construed as a threat similar to those the French and Spanish faced in their Caribbean colonies from people of mixed blood - that racial attitudes hardened, this trend further supported by the arrival of the "Fishing Fleets" from the Mother Country with nubile women.

Mr Kolar Re: Sex, Eugenics & Social Snobbery... ... I feel that your first paragraph above is the pertinent one - the intricacies of Hinduism (as Mr Narayanan has previously pointed out) are largely lost on the Western mind - this is as true today as it was two hundred years ago ....

Hello Mr. Craig. The chief reason why the Eastern - and particularly Hindu, which is a medley of beliefs and sects - religious process seems inscrutable to the Western mind is due to the latter having no popular spiritual aristocracy of any kind, it being primarily political and economic since The Glorious Revolution (in England, at least). The Hindu's social life has been governed by precisely such an aristocracy for at least 2000 years, thus giving it a profoundly religious bent. Regarding conversion, Hinduism has always accepted "aliens", they being absorbed under new castes. Swami Vivekananda suggests that Vaishnavism arose from just such a group. It could be claimed that following the Hindu way of life (whatever that means, as it cannot be defined due it's amorphous nature) is all that is required to be a Hindu. But, speaking of labels, this is more of a Buddhist manner of dealing with reality, where beliefs are rarely practiced outside their ascetic order. The primary contribution of the Hindu aristocracy lies in the application of their philosophy to sociology, that is, to construct a society consistent with the end goals of such thought. It is said that no other religion in India, or the world, has applied this to the extent Hinduism has, which is reason why Buddhism and other alternative paths towards the same goal never did catch on in the subcontinent.

Actually Shashi, under Ashoka, pretty much all of India became Buddhist. Apparently the decline of Buddhism in India came about in the 13th century (the same time that it was rising in Southeast Asia). I'm no authority on this - just quoting what I've read.

Hello Ms. Ullal. Thank you for your message. It would indeed be incredible if Buddhism was widely adopted under Ashoka, though it receive imperial patronage. I shall look it up. Could you please point me to your source, so I can read that too? Thanks.

Shashi Kolar, I just read 'decline of Buddhism in India' on Wikipedia.

RBSI is just about my favorite page on Facebook!