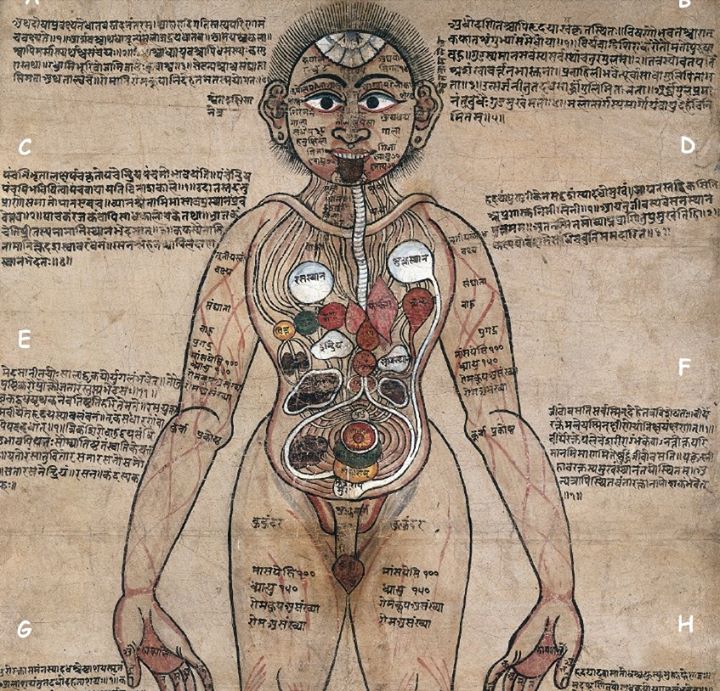 Essay:
The Anatomical Man And His Sanskrit Context
By Dominik Wujastyk

"A widely-known painting currently in the Wellcome Library depicts an anatomical view of the male human body according to the tenets of classical Indian medicine, or ayurveda. The painting is surrounded by text passages in the Sanskrit language on medical and anatomical topics. In this paper, the Sanskrit texts are identified, edited, translated and assessed. I establish a terminus a quo for the painting, and explore the relationship of text and image."

can't read it but it's an amazing pic

Details of the text with transcription and translation are given in the link. Bhava Misra -the author of "Bhavprakash" - a treatise from where the excerpts in the picture are taken, is stated to have come from Madras. The paper says that Madras was located South of Siyalkot. He is obviously refering to Madr desh (region). In that context, I tried to find the etymology of Madras. I am not satisfied why the English called today's Tamilnadu as the province of Madras. Is the an informed study available on this question?

Madr Desh is old name of Punjab ( may be eastern part of Punjab). Sial kot is a famous city in West Punjab (Pakistan)