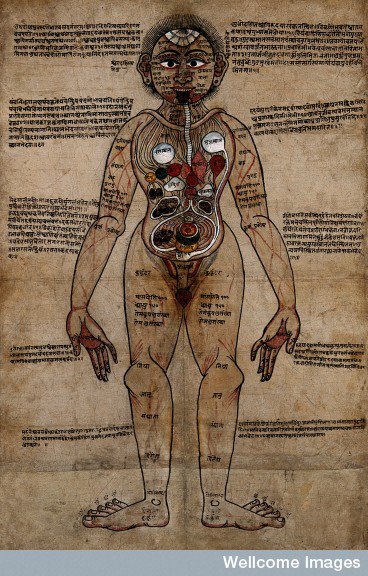 The Anatomical Man And His Sanskrit Context
By Dominik Wujastyk

"A widely-known painting currently in the Wellcome Library depicts an anatomical view of the male human body according to the tenets of classical Indian medicine, or ayurveda. The painting is surrounded by text passages in the Sanskrit language on medical and anatomical topics. In this paper, the Sanskrit texts are identified, edited, translated and assessed. I establish a terminus a quo for the painting, and explore the relationship of text and image."

Evidently the proportions of the Vitruvian Man were unknown to the good folk who drew this :-)

Rare Book Society of India can please post the details of this image? which manuscript does this come from?

the Indian science that we Indians forgot :(

Yes, please post from which manuscript? Love this art!

About the Ayurvedic man: In his article in Asian medicine, Dr Dominik Wujastyk identifies the lettering surrounding the work as verses from a classic Ayurvedic work called Bh?vaprak??a by Bh?vami?ra (fl. ca. 1650–1690). [2] Bh?vami?ra is thought to have been born near Madras (Chennai) and to have worked in Benares (Varanasi). The extracts are taken from chapter 3 of his work, that deals with anatomy and embryology. The verses on and around the painting do not function as tightly-integrated labels to the body image, but rather as reflections on related anatomical issues. Most of the texts (in Sanskrit and other Indic tongues) are garbled, suggesting that they might have been copied from an earlier version of the painting now untraced, by someone who did not understand what was being transcribed. Dr Wujastyk provides an image, a transliteration and a translation of each of the blocks of text. The parts depicted and described by Bh?vami?ra by do not necessarily correspond one-to-one with organs of the body familiar to those brought up with Traditional Western Medicine or its present day derivatives. For instance the sequence of parts involved in digestion and excretion includes numerous “receptacles” (of wind, of impurities, of urine, of phlegm, of raw matter, of digested food etc.) that are not necessarily identifiable with specific service stations along the highway of the western alimentary canal. Likewise there are separate names for two separate parts between the ankle and the heel, which have no western names. The two lungs, regarded in the west as identical organs in reverse, have two different and unrelated names in Sanskrit, and both organs are given different functions from respiration. Read more: http://bit.ly/Y3iiNQ

Anannya Bohidar and Janel DuRoss: Check out the post again for more details and the story behind this image.

Why Ayurvedic Medicine is one of the two systems I have great respect for.