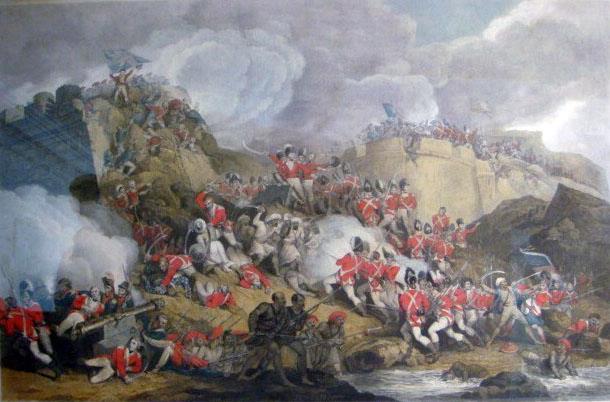 Published Review (1801): As Mr. Porter's celebrated picture of the Storming of Seringapatam will probably be sent to embellish the eastern world, few private mansions being sufficiently capacious to contain it, and the spirit of public patronage too severely palsied by the calamities of the times to present a purchaser, the following particulars may convey to the imagination a feeble outline of its variety and grandeur, while it gratifies the feelings of those whose relatives adorn the canvass. The most striking group meets the eye in the centre of the picture. It consists of General Baird, attended by his aid-de-camps, animating and encouraging the troops, who are storming the battery; while Serjeant Graham, who has already mounted the rampart, and planted the British colours on its summit, is shot dead by an Indian, at the moment when he is giving the signal of victory. At the top of the first acclivity, Major Craigie, with the grenadiers of the 12th regiment, is directing the attack; while another party, of the 74th, under Major Skelly, are preparing to mount the battery on the left, aided by the Madras native pioneers, with scaling ladders. Captain Cormicke, a brave officer is seen falling headlong down the steep, being killed near the upper part of the rampart. Halfway up the breach is a sally of Tippoo's guards, who are repulsed by the 74th regiment. Lieutenant Prendergast appears mortally wounded by a musket shot; and Lieutenant Shaw lies among the slain in the thickest groups of the battle. In the foreground, to the left of the battalion, lies Captain Owen, of the 77th. He rests upon a cannon, is supported by an artillery-man, who points towards the Indian from whom he received his death wound. This group is said to be the first which Mr. Porter completed on the canvas. The Indian is seen crouching at the feet of the dying officer, a bayonet having passed through his left breast is visible first below his shoulder. The fore-ground at the foot of the rampart is occupied by a party of Tippoo's tiger grenadiers. They are seen stealing forwards from a covered way, but are encountered by a group of the 73d regiment, led by Captain Macleod; who, being wounded in the lungs, is conducted off the ground by a soldier of the Meuron regiment. A fierce encounter at the same moment takes place between a serjeant of the Highlanders and the leader of the Tiger-men of Tippoo's army. The right battalion covers the 73d light companies, and the Scotch brigade are led to the breach by Lieutenant Gawler and Captain Molle, while the remainder of the 73d Highlanders are boldly advancing across a branch of the cavery. [sic] On the right of the fore-ground is the gallant Colonel Dunlop, wounded and borne off between two grenadiers; and in front of the mortar battery is Major Allen, with Colonel Dallas and Major Beatson. Several dead and dying are seen at the foot of the breach, and on the margin of the river; while the chief engineer, Major Agnew appears communicating intelligence. The distant view to the right presents the British camp, with general Harris, and other officers, on horseback. On the bastion to the right of the breach Colonel Sherbrooke is seen directing the assault along the ramparts, where the 12th and 33d regiments are bayonetting the enemy, and pushing forward to gain the inner works. To the left on the rampart stands TIPPOO SULTAUN, attended by his chiefs and standard bearers. He is exposed near the top of the gateway, beneath which he afterwards perished. Near the Sultaun stands a French officer, General Chapuy; and near the gateway (which has been accidently [sic] let down by the destruction of the chains) is a terrific phalanx of the Sultan's guards, known by the appellation of Hyder's Grenadiers. Lieutenant Lalor in the agonies of death is falling from the bridge into the river, at the same time grasping the belt of an Indian soldier, who is seen in the act of raising his sabre to sever his arm from his body. In the fore-ground a party of the Madras artillery, under Lieutenant Bell, advance, with heavy guns, to force the sally-port, while he is directing the men, with the artillery Lascars, to drag them to the rear. In the left extremity of the picture, Captain Lardy of the regiment De Meuron is binding his wounded arm, in order that he may rejoin the storming party; and behind the group of artillery are the native troops, with a party of the Nizam's forces, headed by Lieutenant Colonel Mignan, while Lieutenant Pasley, as Major of Brigade, is animating them on the attack. Above the walls of the fortress are seen the magnificent buildings of Seringapatam. The mosque of white marble, with towers that seem to penetrate the sky, is on the right of the breach; and on the left the superb palace of Tippoo Sultaun, with the gardens of the Laul Bagh, contrast the clouds of sulphur, and the mingling horrors of the more prominent scenery. Imagination cannot present a coup d'oeil more grand or more variegated, than may be contemplated in this extensive picture, which being the first of the kind, we believe, that ever has been attempted, will open a field for the progress of fame, and present a model for the artist of future times to admire and emulate; and it will prove a gratifying promise to the perspective of military prowess, that the names and persons of the most distinguished of Valour's sons, will live to after ages in the glowing colours of the canvas, as well as in the annals of their country. Source Extract from entry: 'Mr. Robert Ker Porter' in Public Characters. Dublin, J. Moore, 1801 pp. 140-141.