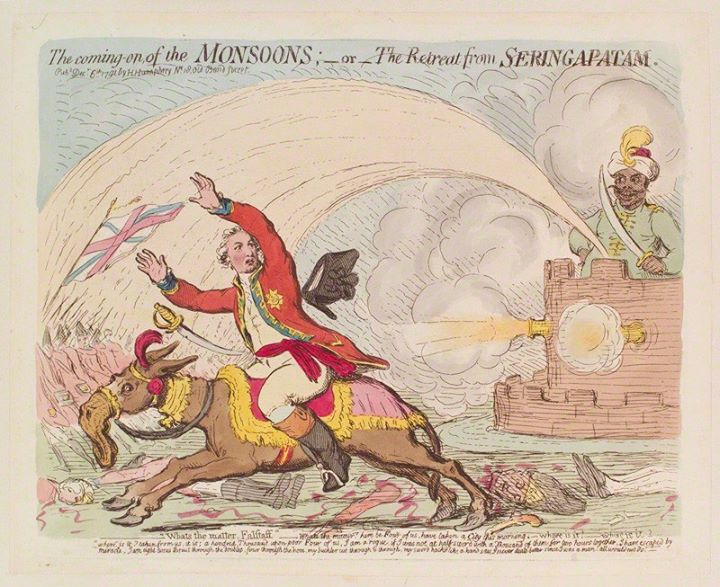 Tipu was such an eye sore to the British

Gillray was an absolute genius - and amongst the great caricaturists of the Georgian era (Hogarth, Cruikshank, Rowlandson etc &c), to my mind, he stands out as the finest artist. His scathing satirical observations were often very cruel - but always pertinent. The drawing above is a typical example of his work - and of his form of humour - on this occasion, comparing the figure in flight (presumably Lord Cornwallis ?) with the pompous, cowardly and rather ridiculous Falstaff from Shakespeare's ' The Merry Wives of Windsor '. Members of the RBSI will be particularly interested in the numerous sketches and cartoons that he produced during the impeachment trial of Warren Hastings - which dragged on and on, throughout the late 1780s and early 1790s. During this period Gillray ceaselessly mocked and lampooned not only what he percieved as inadequacies within the British justice system, but - in a more general manner - the corporate greed and excess of the East India Company itself.

*Footnote to previous post : Taking my que from the R.B.S.I, I took a quick stroll through the British Library online archives this afternoon, looking for further examples of Gillray's work that have a specific reference to, or an emphasis upon, the Anglo-Indian realtionship of the late 18th century. There are many such examples to choose from, but this rather choice item (see below), published in 1788, must be considered a personal favourite. It depicts Warren Hastings distributing bags of money (marked ' Pagodas' and 'Roopees') to members of the British establishment (Queen Charlotte, Pitt the Younger, Thurlow etc &c) of the time - whilst seated upon a lavatory, into which King George III has inserted a greedy hand : " I am at the bottom of it " ! Gillray was well-known for his very raw and bawdy sense of humour - and many of his drawings openly courted scandal - with the victims of his satirical quill often being depicted in the act of defecation, or else vomiting, or in various states of undress, or in some other base or compromsing position. There are so many little details within Gillray's cartoons, many of which have a deeper meaning of some sort or another, or serve as a reference to a specific event of the period, that it difficult to explain them all. In this example, Hastings is saying : " Dear Gentlemen, this is too little ! Your moderation really distresses (?) me !"... For those who might be wondering what this means beyond the straightforward - it serves as a parody of Robert Clive's famous words (when under parliamentary investigation) of a decade or so earlier - viz : " I stand astonished at my own moderation !" http://www.bl.uk/learning/images/georgian/large107368.html

Thank you Julian! This is unbelievable!! I just cannot imagine the level of tolerance of the powers and people of the time towards what appears to be absolutely offensive even by today's supposed open standards. It is inconceivable for any such cartoons to be published in India today...the artist would be sent to prison immediately... 8 'seditious' cartoons for which Aseem Trivedi was arrested: http://bit.ly/WVKCAB http://bit.ly/XsVQvT Makes me wonder whether the source of Aseem's inspiration is Gillray... since the commode seems to be the main feature in both their cartoons.

Gillray appears to have held liberal views in his youth but after 1793 he became a supporter of the Tories and critical of the Radicals. When a friend asked Gillray why his prints were so critical of the Whigs he replied: "they are poor, they do not buy my prints and I must draw on the purses of the larger parties." http://www.guardian.co.uk/culture/2009/dec/15/james-gillray-cartoons-ministry-justice

R.B.S.I - The British are a people who have a long and happy history of mocking their own authority figures - we have, over the centuries, developed this practise into an art form - and an ability to laugh at and tweak the nose of the establishment is deeply embedded within our national psyche ! The fact that Gillray was indulged and allowed to publish his cartoons without restraint, serves as a testament to our tradition of toleration (although there have certainly been periods wherein this virtue has been circumscribed or even withdrawn !) Re: " Makes me wonder whether the source of Aseem's inspiration is Gillray" Of this, I have no doubt. Gillray has served as a role-model for satirical artists and commentators around the globe for more than two hundred years – and his style has scores of imitators. I was aware of this latest acolyte’s - Mr Trivedi – detention, which was quite widely reported upon and criticised within the British media. It is a mistake, I believe, to simply assume that we who inhabit the modern world enjoy greater personal freedoms than our ancestors. Of course most of us now have ' the vote ' and so on, and can involve ourselves directly in political affairs if we so choose – and we have much greater mobility, both social and geographic - but I tend to think that for all of the undoubted advances that have been made in terms of science and technology since Gillray’s day, he would find many aspects of our modern world strangely familiar – especially as regards civic liberties – and who controls our access to such liberties.

Arindam - An interesting article. It illustrates the change in English social attitudes that occured between Gillray's day and the end of the Victorian era 100 years later - i.e. we became much more straight-laced and puritanical !

Re : "happy history of mocking our own authority figures"...except during the Victorian regime, when 40 of his cartoons were seized (as mentioned in the attached article). Julian, I recollect from an earlier reading that JG had his eyes shut when depicting Napoleon. In his satires NB was always associated with guillotine, whereas on all counts, no possible sympathy existed between Napoleon and the guillotine. Hatred for the French maybe?

An old associate of mine has a book of JG's compiled works including the Victorian age suppressed works. The associate's grandfather had brought it from England when there as a student.

... Victorian " regime ", cartoons " seized "... Nineteenth century Britain was not some sort of Draconian police-state, Arindam ! It was, however, a deeply religious society, in which the slack moral standards of the Georgians were severely frowned upon... The guillotine has always been associated in English minds with French political repression and instability, and with Jacobin ' radicalism ' - hence Gillray's use of the image in his cartoons - which, of course, being satirical, rely heavily upon symbolism as an artistic device ... Re: " Hatred for the French maybe ? " ... Ha ha ha ... now that is a very old wound that is best left alone to heal ....