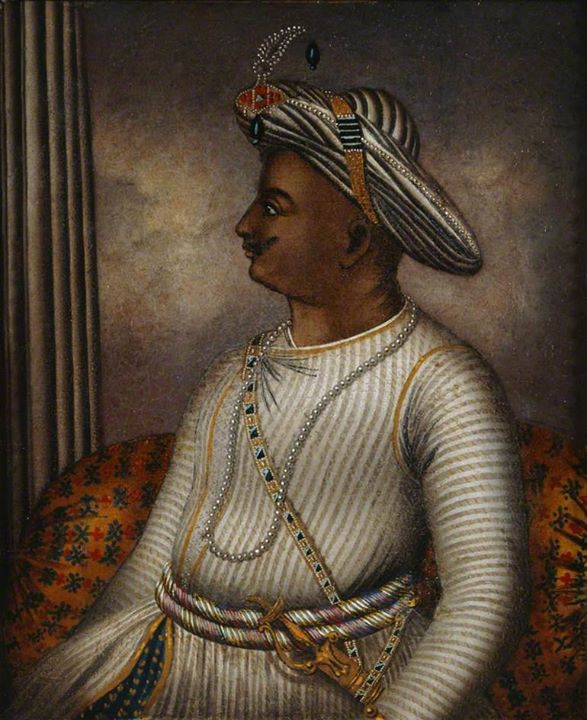 By the end of the 18th century, in India, the English East India Company was fast developing as the empire building arm of the British Government. But it found its aims being thwarted by the famous Tipu Sultan, the ruler of Mysore. Knowing the rivalry of the French and the British, Tipu Sultan decided to use the French to bolster himself against the British. French officers were recruited for training the Mysore army. In 1779, Tipu’s father Hyder Ali had protected the French settlement of Mahe in the west coast of India from being overrun by the British. A few years after becoming the Sultan of Mysore, Tipu decided to strengthen his friendship with the French. He sent two of his trusted courtiers to France via the French colony of Mauritius as his ambassadors bearing letters from him to King Louis XVI of France. But King Louis, who met the envoys in Paris, was not interested in the friendship of an oriental monarch thousands of miles away from metropolitan France and the emissaries of Tipu returned without any concrete gains.

Soon the French Revolution of 1792 removed the king from the throne and the French Revolutionary Council known as the Directory was too concerned with the internal affairs of France to pay much attention to their Indian ally. But when Napoleon Bonaparte became the first Consul of France, he urged the Directory to cultivate friendly relations with Tipu Sultan. He had sent many flattering letters to Tipu Sultan, whom he always addressed as "The most mangnificent Sultan, our Greatest friend, Tippoo Sahib." Finally in 1796, the Directory of the French Government decided to take some steps to help their Indian ally. In December that year, a French ship arrived in Mangalore carrying in it Francois Ripaud, who was to advise Tipu about the nature of French help that would be forthcoming. French records do not speak highly of this adventurer Ripaud and even Tipu Sultan’s personal letters do not throw much light on this Frenchman. Indeed, when later Lord Mornington, the English East India Company’s Governor-General in India complained to Tipu that he was harbouring hostile Frenchmen in his court, the Sultan diplomatically remarked that Ripaud had drifted to Mangalore in a ship during a storm at sea. "I am having no discussions with him at all,"wrote Tipu to Mornington. "In fact my sincere wish is that the French, who are of crooked disposition and are enemies of mankind, may be ever depressed and ruined."

A half-length portrait of Tipu, seated and looking to the left.

Thanks RBSI, a good picture of Tipu.

Mr. Mistry, your website says it is still under construction. I find only three small paintings without any details and three pix of Udaipur! Nothing more.

A fascinating tale - and it all has a rather Machiavellian flavour - such subterfuge and skulldugery ! It was said of Austen Chamberlain, in political circles before the second war, that : " He always played the game and he always lost it." ... for some reason this phrase always springs to mind when I think of Tipu Sultan ! ... As the article makes clear - perhaps his greatest tactical error was to place his confidence and trust in the prowess of an army that was camped several thousand miles away, on the shores of the Mediterranean - rather than starting negotiations with the army that was camped practically outside of his own city walls !...