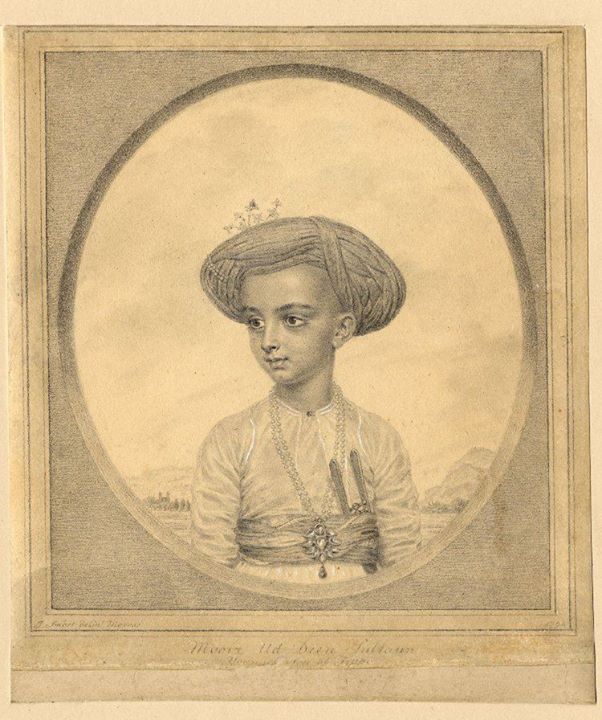 Portrait of Mu'izz Ud-Din Sultan; half-length to front, head half-l, wearing a turban with small spray of flowers, within an oval - 1794

On the verso (now removed and in the dossier), was a manuscript note as follows: "Mooza Ud Deen, third Son of the Nabob Tippoo / Sultaun, was delivered up an Hostage to the / Marquis Cornwallis in the Camp Seringapatam on / the 24 Feby., 1792, he is described as being at that time about / 8 Years of Age remarkably fair with angular Features, a / small round Face, large full Eyes, & an animated appearance. // This original Drawing was taken by / Smart soon after the Princes Arrival at Madras with his / Brother Abdul Karuck. // In 1779 Hostilities recommenced, & on / the 4th of May in that Year, Seringapatam was stormed by the / English Army, & Tippoo Sultaun slain. All his Family were / made Prisoners, & Mooza Ud Deen with his Brothers was sent / to the Fort of Vellore, where they remained in Confinement / until August 1806, when in consequence of a Mutiny & / Massacre of the English Garrison in Vellore on the 10 July 1806, / which some of the Prisoners, particularly Mooza Ud Deen / are said to have encouraged & assisted, they were all / removed to Fort St. George, & from there sent by Sea to / Fort William, in Bengal, where they now (1811) remain / & probably will be Prisoners for Life."

Curator's comments:
This highly finished pair of drawings by John Smart, the leading portrait miniaturist and draughtsman, made towards the end of his ten-year-long stay in India, represent the two sons of Tipu Sultan (1750-99), the ruler of Mysore, who was finally defeated by the British at Seringapatam on 4 May 1799. Five years earlier Smart had drawn the two boys in these finished graphite portraits; two years earlier in 1792 they had been taken hostage in the Treaty of Madras by the British led by Charles, 1st marquess Cornwallis, the governor-general and commander-in-chief in India. Thomas Twining in his Travels in India (1893; cited in Foskett) wrote that he was introduced to the two young princes by Colonel Doveton of the Madras army on 8 August 1792 and described the encounter: ‘on our entering their rooms they seemed quite glad to see us, asked us through Colonel Doveton, inquired whether we had breakfasted, our names, and many other questions. There is not much difference in their size. The youngest Mirza, is most pleasing, He is fair, with large, handsome eyes. He was very cheerful and polite; talked a great deal to us, and very sensibly, though not eight years of age. When he heard that we should see Lord Cornwallis, he desired, with tears in his eyes, to be remembered to him. “Tell Lord Cornwallis that he always with me”.’ Twining continued his account with a description of the commission of these two portraits: ‘Mr Smart, miniature painter, who told me to my surprise that he had taken my mother’s picture, was taking their likenesses. They are to be sent when finished to Tippoo Sahib; for Lord Cornwallis having asked them if he would like to have his sons’ pictures, “yes”, said he, “provided they be accompanied by Lord Cornwallis’s”.’

this is awesome history...