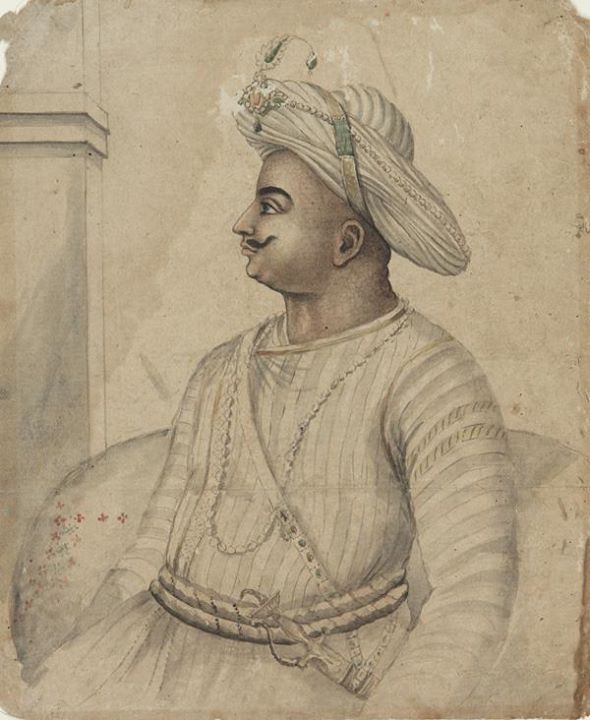 Digital Rare Book:
Official Documents, Relative to the Negotiations Carried on by Tippoo Sultaun By The French Nation and other Foreign States for the Purposes Hostile to the British Nation to which is added Proceedings of a Jacobin Club formed at Seringapatam, by the French Soldiers in Corps commanded by M.Dopart.
Printed at The Honorable Company's Press, Calcutta - 1799

This Jacobin Club was begun by Francois Ripaud, who showed up on the shore of Mangalore around the time. The Club was made up of several French soldiers and officers who served in Seringapatam. He promised French help, causing the sultan to send an embassy up to France along with Ripaud. But the latter is said to have disappeared soon after he reached his homeland. As an aside, this picture of Tipu shows his fine whiskers. One-half of it was snipped off his dead body as a souvenir by an English officer while it was laid for viewing.

Repaud was a privateer from Isle of France showed p at Managlore in 1797. He was an impostor and claimed as a second in command in Mauritius. Tipu fell for his guile and entrusted him the task of negotiating with Napoleon and French Nation much against the advice of his principal officers. On his almost failed mission, Repaud returned with a motley crowd of 99 refuse from Isale of France in April 1798. They were burning with zeal about liberty and equality of the French Revolution and formed the Jacobian Club at S'Patna and tipu enrolled as Citizen Tipu ! This gratuitous folly brought his ultimate end !

This is a book with very good collection of Tipu's correspondence with the French and Napolean. A selection of some important documents was published in Calcutta by an official of the National Archives. The Karnataka Archives in Bangalore has copies of some of these letters, probably collected from UK. I had seen some of them displayed in an exhibition by the Archives a few years ago. Now defunct Literary Union, Mysore, had a book of collection of these letters, published somewhere around 1802. I borrowed it and made typed copies of all the letters, as there was no photocopy facility then. A website dedicated to Tipu has also published all these letters.