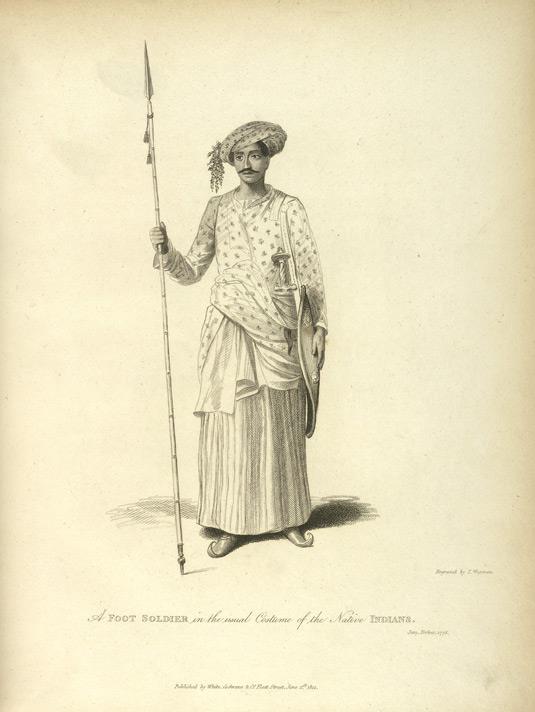 Plate forty-six from the second volume of James Forbes' "Oriental Memoirs". Forbes(1749-1819) made the original drawing of this 'spear-man in the Ragobah's[Raghunath Row] service' in the Mahratta Camp at Cambay where his friend Sir Charles Malet was the English Resident. 'Those who carry matchlocks, or other Indian arms, are generally dressed in a similar manner, sometimes in a jacket and shorter drawers, according to their own choice; no conformity being attempted as in the corps of native sepoys in the Company's service.'

But unfortunatly, our marathas loose their dyansty in 1818 due to the discontent of the maratha sardars..

Raghunathrao wanted to become Peshva after his brother Nanasaheb Peshva died in 1761. However, Nanasaheb's son Madhavrao became the Peshva. Madhavraos tenure was short lived. His brother Narayanrao became the Peshva after Madhavrao's death. Thus Raghunathrao was once again denied the throne. Desperation to acquire the throne he ordered his private troops to arrest Narayanrao. His scheming wife, Anandibai, altered the written order to say that Narayanrao be killed. The Marathi word for "be arrested" is धरावे. She changed the first letter to मा. The instruction now read as "मारावे" - "be killed". Narayanrao was killed at the famous "Shaniwarwada" in Pune. The irony was that the young lad was shouting for help in the name of his uncle Raghunath as the pursuing gardis (equivalent of artillary corps owing allegiance to Raghunath) slay him (perhaps as Raghunathrao looked on). This episode in Maratha history has all the marking of Shakespear's drama. We must also remember that the Peshvas were brahmins by caste. This fact is often lost sight of when discussing Maratha history. Raghunathrao was as brave and skilled general as his father Bajirao. Raghunathrao raided far and wide and is known to have crossed the Attock in Peshavar.

After Narayanrao's murder two noteworthy events happened in Pune Darbar .First was the murder trial conducted by fiercely independent and honest Nyayadhish(Judge)Ramashastri Prabhune. He found Raghunathrao guilty of conspiracy to Murder and awarded Death penalty to him. As by this time Raghunathrao had become all powerful the death sentence could not be executed .Ramshastri resigned and went to Kashi (Benares) to live his life in retirement.So in Marathi folklore Ramshastri's justice is treated as a great legend.Second event was what is known as Barbhainche Karasthan or intrigue of twelve noblemen of Maratha Confederacy.In this all the leading men including Nana Phadanwis ,Mahadji Shinde planned and removed Raghunathrao from the masnad of Peshwa and crowned the yet to be born child of Narayanrao as Peshwa!!!!!!!!This child was Sawai Madhavrao Peshwa whose painting was posted by RBSI yesterday.