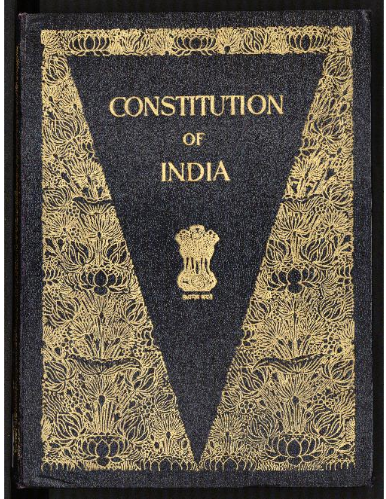 This book is one of 1,000 photolithographic reproductions of the Constitution of the Republic of India, which came into effect on January 26, 1950, after being approved by the Constituent Assembly on November 26, 1949. The original of this elaborate edition took nearly five years to produce. It is signed by the framers of the constitution, most of whom are regarded as the founders of the Republic of India. The original of the book is kept in a special helium-filled case in the Library of the Parliament of India. The illustrations represent styles from the different civilizations of the subcontinent, ranging from the prehistoric Mohenjodaro, in the Indus Valley, to the present. The calligraphy in the book was done by Prem Behari Narain Raizda. It was illuminated by Nandalal Bose and other artists, published by Dehra Dun, and photolithographed at the Survey of India Offices.

Great information to many who are unaware of details.

info that is very imp.

Do you know that our Constitution has never ever declared a Holiday on 26th January and 15th August! !!!Thatz how they wanted us to be! Work for becoming a prosperous India.

PREAMBLE: WE, THE PEOPLE OF INDIA, have solemnly resolved to constitute India into a SOVEREIGN SOCIALIST SECULAR DEMOCRATIC REPUBLIC and to secure to all its citizens: JUSTICE, social, economic and political; LIBERTY of thought, expression, belief, faith and worship; EQUALITY of status and of opportunity; and to promote among them all FRATERNITY assuring the dignity of the individual and the unity and integrity of the Nation; IN OUR CONSTITUENT ASSEMBLY this twenty-sixth day of November, 1949. However, this Constitution appears to have been one of the best kept secrets of the Republic of India. How many of you have read it? http://wp.me/p1yKCM-29

Qamar Rehmani sir, with your permission, i am copy pasting your comment on my wall. Thank you.

See the signature of rre people legends of india on this book https://www.createspace.com/3487798

Thanks for the addt.information Natarajan subramanian