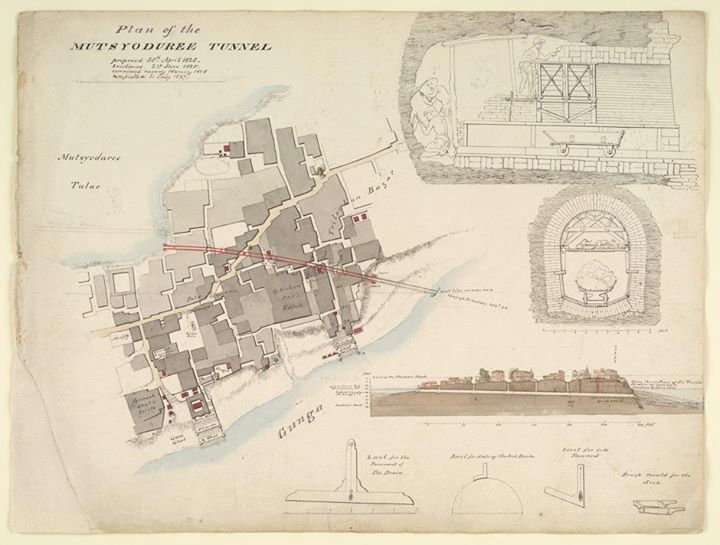 Pen and ink and watercolour map and cross section of the drainage tunnel from the Machhodri tank to the river at Varanasi (Benares) in Uttar Pradesh by James Prinsep (1799-1840), dated c. 1825. This image shows the elevation and cross section of the tunnelling process and drawings of the equipment used and is inscribed: 'Plan of the Mutsyoduree Tunnel. Proposed 30th April 1825. Sanctioned 2nd June 1825. Commenced masonry 1826. Completed 31 July 1827'. On the reverse of the map is an unfinished diagram.

Varanasi stands on the left bank of the Ganges and at its highest point stood well away from the river, but as the ground receded towards the water stagnant pools and marshes formed near the most densely inhabited areas during the rainy season and became a danger to health. Prinsep devised a plan to drain the city and built a network of drains and a tunnel which were considered a great feat of engineering. The Machhodri tank, drained by Prinsep, was formerly a marsh and later the site of a park and a grain market, the Bisheshwarganj, established in 1830. Prinsep came from a family who served in India for three generations; five of his brothers were also in the country. James, also a noted scholar and antiquarian, was Assistant Assay Master at the old Calcutta Mint in 1819, and after occupying the position at the Benares Mint from 1820-30 finally became Assay Master of the Calcutta Mint in 1832.

This is amazing. I always wondered about the architect of Banaras' drainage system. a few years back when some city roads suddenly collapsed and underground sewage tunnels were seen for the 1st time, I remember reading in the newspapers that the municipal engineers said that they do not have the masterplan/map as it is very ancient!