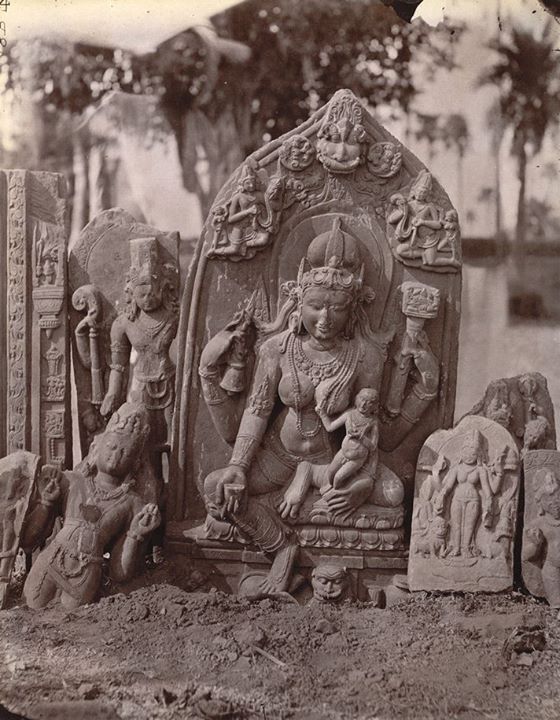 Statue of four-armed goddess with child (?Devi) and other fragments of sculpture, Rajaona, Monghyr District - 1871

Photograph of a statue of a four-armed goddess with child (Devi?) and other fragments of sculpture from Rajaona, Monghyr (Munger) District, taken by Joseph David Beglar around 1871-72. Rajaona is a modern village in Bihar surrounded by the remains of ancient occupation in the form of mounds. In a report of his photographic tour of 1871-72 Alexander Cunningham wrote, " Rajaona is a large village surrounded by numerous mounds, the remains of ancient buildings which have furnished several miles of brick ballast to the railway." The sculpture shown in this photograph is Brahmanical and there were once a number of Hindu temples at the site dedicated to Shiva and other deities.

Must be the statue of "Santhaana Lakshmi", one among ashta Lakshmis...

More likely closer to Durga as her vahana is clearly a lion and she is holding a trident and a bell.

MAY BE statue of Goddess Parvatiji.. during the birth of lord Ganesh. vahana of lion is also symbol of Parvathiji before she recognised as Ma Durga ..

Yes she is hariti bestowed of progeny