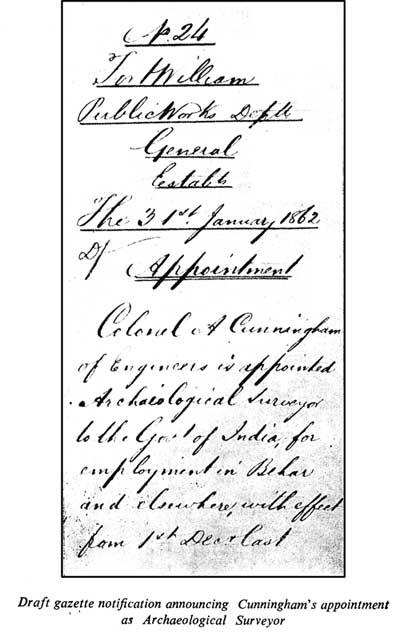 Alexander Cunningham and his contribution to the archaeological surveys in India :

"...The fresh proposal put by Alexander Cunningham was given due attention by Lord Canning, who sanctioned a scheme of survey in northern India . It was defined as: - “an accurate description-illustrated by plans, measurements, drawings or photographs and by copies of inscriptions-of such remains as deserve notice, with the history of them so far as it may be traceable, and a record of the traditions that are retained regarding them”.

Cunningham was appointed as the first Archaeological Surveyor from December 1861. He surveyed areas stretching from Gaya in the east to the Indus in the northwest, and from Kalsi in the north to the Narmada in the south, between 1861 and 1865. For this, he largely followed the footsteps of the Chinese pilgrim Hieun Tsang. However, the endeavours came to a sudden halt due to the abolition of the Archaeological Survey in 1866 by Lord Lawrence. In the meanwhile however an act (XX) was passed in 1863, which vested powers with the government ‘to prevent injury to and preserve buildings remarkable for their antiquity or for their historical or architectural value’.

Lord Lawrence based on the suggestions by the then Secretary of State, Sir Stafford Northcote, called on the local governments to list historical buildings and obtain photographs of them. This was later followed by instructions to prepare casts of important buildings to understand the different architectural styles of India . The work was entrusted to four independent parties in Bombay , Madras , Bengal and the Northwestern Provinces . Individuals like Sykes and Burgess in Bombay; Lt. H.H. Cole in Kashmir, Mathura and other places; Rajendralal Mitra in Orissa contributed a lot under this scheme.

The attention of the government for undertaking repairs and conservation, protecting the ancient monuments from falling into disuse was not drawn until Duke of Argyll, the new Secretary of State, advised the Government of India to establish a central department to tackle the archaeological problems of the whole country. He also stressed on the need for conservation of monuments stating that it was the bounden duty of the Government ‘to prevent its own servants from wantonly accelerating the decay’ of monuments.

The Archaeological Survey was revived as a distinct department of the government and Cunningham was appointed as Director General who assumed his charge in February 1871. The department was entrusted with the task of doing - ‘a complete search over the whole country, and a systematic record and description of all architectural and other remains that are either remarkable for their antiquity, or their beauty or their historical interest’.
Cunningham was also entrusted - ‘to direct his attention to the preparation of a brief summary of the labours of former enquirers and of the results which had already been obtained and to the formulation of a general scheme of systematic enquiry for the guidance of a staff of assistance in present and future researches’.

Cunningham was given two assistants J.D. Beglar and A.C. Carlleyle who were later joined by H.B.W. Garrik. Cunningham resumed surveys in Delhi and Agra in 1871; in 1872 he surveyed Rajputana, Bundelkhand, Mathura , Bodh Gaya and Gaur; in 1873, Panjab; between 1873 and 1877, Central Province , Bundelkhand and Malwa. To initiate the survey in a systematic way Alexander Cunningham chose to record the Buddhist finds and monuments by plotting them on a map so as to understand the ancient trade route.

The surveys of Cunningham led to several discoveries such as monolithic capitals and other remains of Asoka, specimens of architecture of Gupta and post-Gupta period; great stupa of Bharhut; identification of ancient cities namely: Sankisa, Sravasti and Kausambi. He also brought to prominence the Gupta temples at Tigawa, Bilsar, Bhitargaon, Kuthra, Deogarh and Gupta inscriptions at Eran, Udayagiri and other places."...

Read more at the ASI site:

The great Scot writers & explorers. Allan Cunningham, father of Alexander Cunningham was a stonemason & writer himself. He edited the works of Robert Burns. It was Allan's famous friend, Sir Walter Scott who wrote letters of recommendation to East India Co., which helped find employment for two of Allan's four sons ( Alexander Cunningham & Joseph Davey) in India.Both sons served time in the anglo-sikh wars. Joseph Davey went on to write the excellent "History of the Sikhs". He died young, aged 39. Alexander's first book is " Ladak - physical, statistical & Historical". He died aged 77, never really recovering from the fall off his elephant, on his final tour (in central India).