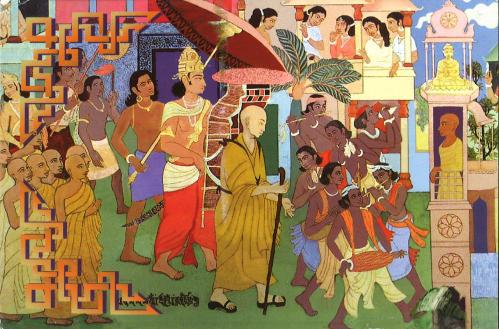 Digital Rare Book:
The Early History of India, from 600 B.C. to the Muhammadan conquest, including the invasion of Alexander the Great
By Vincent A. Smith
Published by Clarendon Press, Oxford - 1904

After the close of the proceedings at Kanauj, Harsha invited his Chinese guest HIUEN TSANG to accompany him to Prayaga (Allahabad), at the confluence of the Ganges and Jumna, to witness another imposing ceremonial. The Master of the Law, although anxious to start on his toilsome homeward journey, could not refuse the invitation, and accompanied his royal host to the scene of the intended display. Harsha explained that it had been his practice for thirty years past, in accordance with the custom of his ancestors, to hold a great quinquennial assembly on the sands where the rivers meet, and there to distribute his accumulated treasures to the poor and needy, as well as to the religious of all denominations. The present occasion was the sixth of the series (644 A.D.), which evidently had not been begun until Harsha had consolidated his power in the north.

The assembly was attended by all the vassal kings and
a vast concourse of humbler folk estimated to number half a million, including poor, orphans, and destitute persons, besides specially invited Brahmans and ascetics of every sect from all parts of Northern India. The proceedings lasted for seventy-five days, terminating apparently about the end of April, and were opened by an imposing procession of all the Rajas with their retinues. The religious services were of the curiously eclectic kind, characteristic of the times. On the first day, an image of Buddha was set up in one of the temporary thatched buildings upon the sands, and vast quantities of costly clothing and other articles of value were distributed. On the second and third days respectively, the images of the Sun and Siva were similarly honoured, but the accompanying distribution in each case was only half the amount of that consecrated to Buddha. The fourth day was devoted to the bestowal of gifts on ten thousand selected religious persons of the Buddhist order, who each received one hundred gold coins, a pearl, and a cotton garment, besides choice food, drink, flowers, and perfumes. During the next following twenty days, the great multitude of Brahmans were the recipients of the royal bounty. They were succeeded by the people whom the Chinese author calls ' heretics,' that is to say, Jains and members of sundry sects, who received gifts for the space of ten days. A like period was allotted for the bestowal of alms upon mendicants from distant regions ; and a month was occupied in the distribution of charitable aid to poor, orphaned, and destitute persons."...