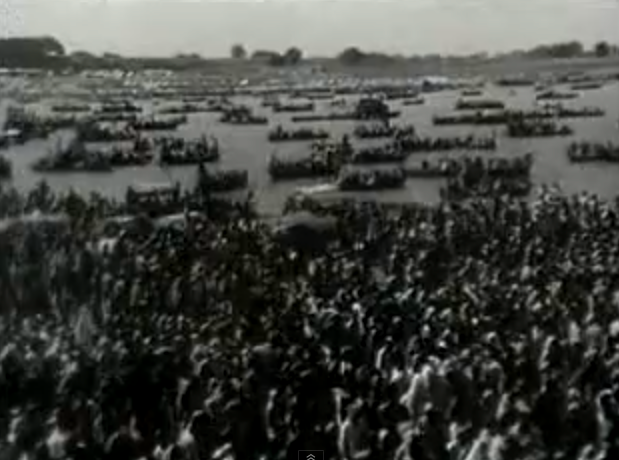 Images of Kumbh Mela (1960)
A documentary by Bimal Roy


In 1960, the great Indian Film Director Bimal Roy had shot the Kumbh Mela in Allahabad and Haridwar as background for his projected film Amrit Kumbh Ki Khoj based on Amrita Kumbher Sandhaney by Samaresh Bose. Unfortunately since the financiers of the Hindi Film Industry were reluctant to put money into the project, the film was never made. Over the years,the footage shot by Bimalda was considered irretrievably lost...

In March 1999 while clearing out Bimalda's editing room, his son Joy Bimal Roy discovered some old film cans containing black and white negatives in seemingly good condition. But all of Bimalda's films were stored in a godown. Joy began doing a telecine of this footage and discovered he had actually found the lost footage of the Kumbh Mela. But along with the discovery came a responsibility. What was to be done with the footage?

Joy has edited the footage, 78 minutes in all into an 11 minute film. But the film was silent. As the search began for an appropriate sound track for the film, both Joy and his Sound Designer, Arun Nambiar, decided that the sound track needed to be true to the visuals of the film. Rather than redo a soundtrack for the film, they decided to use songs, bits and pieces of dialogues and sound effects from Bimalda's films such as a flute piece from Parakh (1960), Mela ambiance from Madhumati (1958), a song from Kabuliwala (1961). The result - a sound track that falls magically into place with the visuals in near perfect sync. Joy also gave the footage a structure by editing it in cycles of day - night and according to the activity happening. Rather than touch the original negative, Joy got a dupe negative made from the entire rushprint and then cut the dupe negative for the final print. Joy acknowledges the help given by Yash Chopra, Adlabs and Kodak in the making of the final film.

As one views the film and the images, the genius of Bimal Roy comes alive. The footage has the touch of a master filmmaker at work. The film once again reaffirms Bimalda's sensitivity and his expertise in creating a mood. The shots in the film, particularly the boats in the Ganga are beautifully composed. Striking images of people arriving for the Mela by train, the Mela Activity, the huge crowds, a little boy appearing lost and crying remain in your mind long after the film is over.

The film has been screened in Mumbai and has 3-4 screenings in Calcutta. Unfortunately, there is no proper network in India to screen films such as these apart from a few isolated private screenings, which is a pity because this is a film every lover of Indian cinema and particularly Bimalda's work must see.

Wow and wow again. Lovely find, RBSI. How does one get to see the movie? Please!

Bimal Roy had this unique ability to construct and deconstruct moments while he was simultaneously telling a story . Movement and fluidity in telling a story is important as is the larger aspect of what the 'big picture' is all about. Cinema can be such an interesting medium to freeze-frame a moment and take it forward.

Thanks , Arindom Sharmila Mitra I found it and saw it.

Urban Julian Check this out!

Thanks a lot for this link to an amazing documentary!

The BBC news in the UK has included the current Mela and although I can't confirm it, or what form it took, they said they'd be covering it live today.

Absolutely amazing! Thanks for sharing.