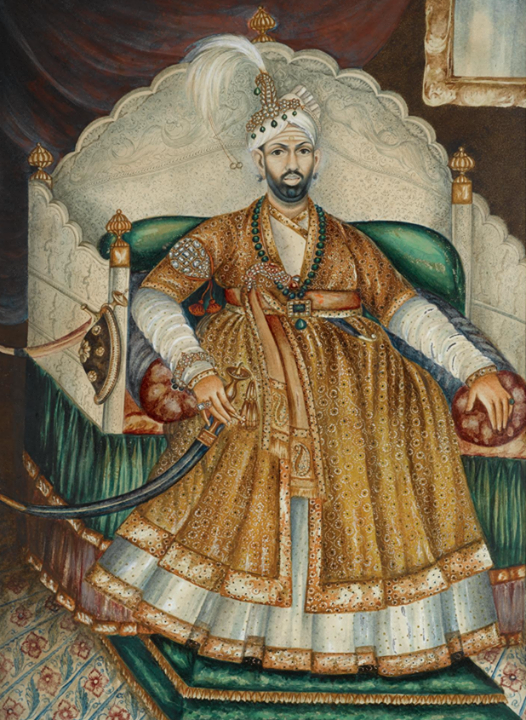 A PORTRAIT OF THE MAHARAJAH OF TRAVANCORE, SOUTH INDIA, CIRCA 1845

This particular throne is a larger version of the other one sent for the Great Exhibition and can be viewed at the Kuthira Malika Palace Museum inside the Trivandrum Fort adjacent to the Pagoda of Sree Anantha Padmanabhaswamy.There is also another magnificient crystal throne exhibited next to it. This throne is entirely Travancorean in design incorporating none of the other's English features.

What is his name?

His grandson is a great carnatic exponent-Prince Rama Varma

The costume is so strange, doesn't seem South Indian at all. Nowhere in sculpture we are seeing this type of garment...need to research some more...wonder why.

@Deepa Krishnan- This was the Chapkan, in vogue those days. The Travancore Mahrajahs wore the traditional Dhoti- 'the Kasavu Mundu', underneath and wore this as a cover for the more princely affairs. The Maharajas of Travancore until the late-Victorian period wore Silk Chapkans as Court Dress when they gave it up for more precisely cut Achkans, Morning Dresses and so on along the patterns of Chesterfield or Tail Coats. It clearly shows how attires are so influenced by the political circumstances of the day. When Greater India was largely Mughal Dominated, there was the clear influence even in the far-south. The old Aryan custom was not to wear anything that was 'not flowing', stitched clothes were a taboo and even hemmed shawls were not permitted.