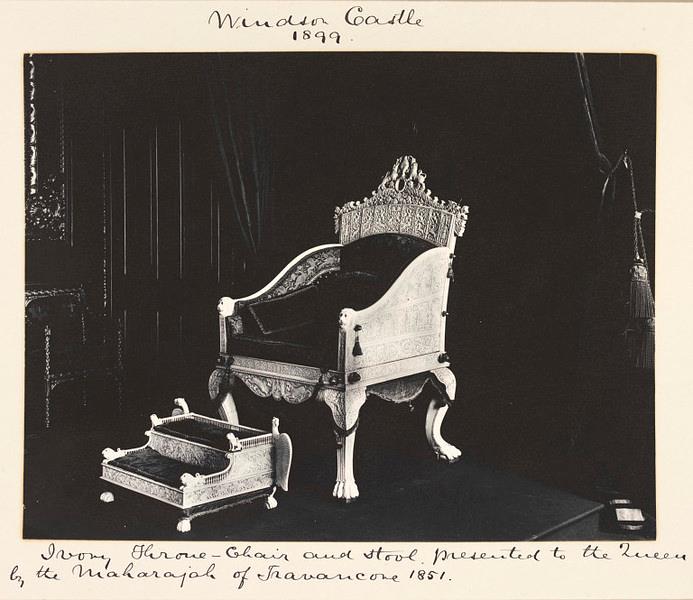 Photograph of the ivory Throne Chair and stool presented to the Queen by the Maharaja of Travancore in 1851, Windsor Castle, by Sir Benjamin Stone, 1899.

Wonder how many elephants died for this.

The Queen was obviously enthralled by the throne and had called it "The Magnificent Chair". It is exhibited alternatively between Windsor and Buckingham. The earliest record of the ivory (with intricate carvings all round) throne dates back to the 6th century to that of Archbishop Maximinias. It is open to public viewing at all times at the museum. Have had the pleasure of seeing both.

In Kerala elephants are used for work. When they age and die only the ivory is extracted. By that time the tusks would have reached the maximum size. Killing elephants for ivory was done mainly in Africa.

Here is a clue (extract from 'The Times' of London, Monday, June 16th, 1851)... ... “on Saturday afternoon a present [ for Her Majesty] was brought to Hyde Park. It consisted of a throne and footstool elaborately carved in ivory, cushioned with richly brocaded velvet, the seat formed of elephants grinders, arranged in mosaic form, and the whole richly studded with rubies and diamonds. To give, by description, any idea of the magnificence of this piece of Court furniture from the East is plainly impossible. It must be seen to be properly appreciated, for no words can do justice to the effect produced by the jewelled eyes of the numerous monsters carved in the framework of the throne, and which appear to throw out a light more appropriate to Travancore than to England, and to the Maharajah than to our constitutional Queen Victoria !”... Interesting to note the reference to ‘constitutional’ forms of Monarchy in the final sentence above. Keep in mind that Europe was fresh from the revolutionary vicissitudes of 1848 at the time that this article was written. Clearly the opulent, expensive materials used in the construction of this throne were considered to be rather lavish and excessively indulgent by British domestic standards at that time.

Interesting Julian. What I had read was something different. The throne was never intended to be gifted when built. It was Prince Albert, an avid art lover and enthusiastic, had organised the Great Exhibition at the Crystal Palace. Dignitaries from around the world were invited. The throne from Travancore was a huge draw that prompted the Empress to express the exhibit as 'magnificent chair'. It was only after the conclusion of the exhibition, having noticed the Empress' interest, was it gifted to her. And do you think the conditions in England were all that dismal? Some of the exquisite jewellry and art collections of Albert-Victoria came around that time.

Really Magnificent work of Indian Art !! We are proud....

Yes, you are quite right, Arindam. This particular throne, crafted in Travancore, formed the centre piece of the Indian section of the Great Exhibition held in London in 1851 – it is my understanding that it was designed with this purpose in mind. You will note that the Lion and the Unicorn motif ( part of the Royal coat of arms of the United Kingdom) forms the upper part of the back of the throne - this seems unlikely to have been included if another purpose had been intended for it ... You may well be correct when you say that " It was only after the conclusion of the exhibition, having noticed the Empress' interest, was it gifted to her". I forward (below) a contemporary image of the throne ,in situ, at the Exhibition. Re: "And do you think the conditions in England were all that dismal?" ... In the 1850s I presume that you mean ? Yes and no. Not if you were wealthy or a member of the burgeoning middle-classes ( who's voice was just then becoming a significant factor in public affairs) but certainly living conditions for the rural poor and the inhabitants of the inner-city slums of the larger industrial cities were shockingly abysmal by any definition or modern standard. http://0.tqn.com/d/history1800s/1/0/7/A/-/-/Indian-tent-Great-Exhibition-gty.jpg

Just to add to Julian's comments- Years later when Her Majesty finally broke her seclusion after prince Albert's death and came out in the public, she chose this Chair to have her Empress of India photograph taken. Disraeli's motive behind this was also, among others,to obviate the continental-style revolutions spreading their message in Britain. Amazing how this work of art did play its part in increasing the splendour of the Royalty.