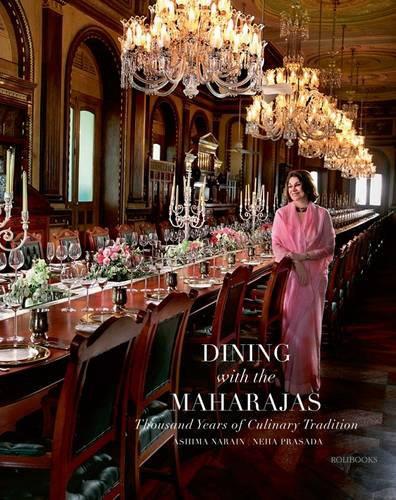 The chefs of the Patiala royal household have more than 140 recipes for pulao in their repertoire. The Rampur royal family used to serve a minimum of 200 dishes at banquets given for visiting heads of state. The royal kitchen of Mahmudabad has in its collection a recipe for a dessert called Sahnak, which is originally attributed to Empress Nur Jehan. The Sailana royal family had skilled chefs who made puris, which when broken had a bird flying out of each of them. In the book, the royals share anecdotes about their and their ancestors’ signature styles of cooking, entertaining, and presentation of food.

Dining with the Maharajas showcases the extraordinarily rich culinary traditions of the royal families of Hyderabad, Jammu and Kashmir, Jodhpur, Mahmudabad, Mysore, Patiala, Rampur, Sailana, Tripura, Udaipur and in the process presents the variety and distinctness of royal cuisines. It highlights their unwavering dedication to preserving their centuries-old food traditions and achieving perfection in cooking. The excellence in Indian cooking and the fine dining are most evident on the dining tables of the maharajas who have turned cooking into an art form.

Much to the delight of food lovers the original royal recipes featured in the book and the accompanying kitchen copy unfold the exotic traditional creations from the royal kitchens. Some of these are secret recipes that have never been published before.

About the Author:
Neha Prasada is an author and journalist based in New Delhi. She has reported for the Times of India,The India Today Group, and Network 18. She has written extensively on health, politics, governance, environment, and social issues. She is a contributing editor to the Architectural Digest magazine.

Neha has also worked as a media consultant on diverse projects which include a political campaign. She assisted in setting up the museum shop at the National Museum, New Delhi. With a keen interest in food and world cuisine, she is a closet chef and this is her debut book.