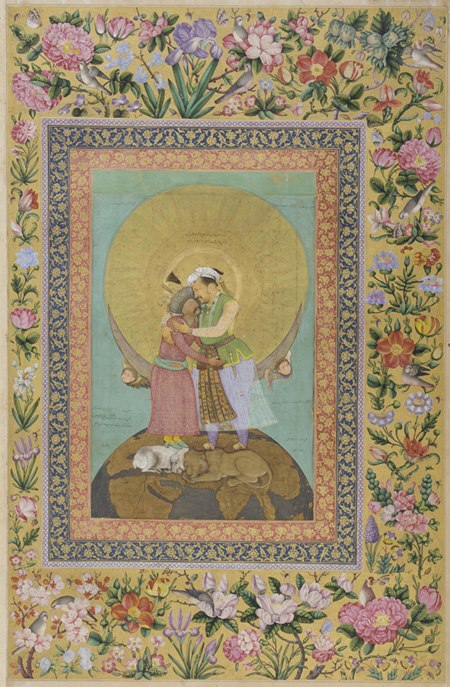 This brilliantly executed painting from the St. Petersburg album is one of several allegorical representations of Jahangir by Abu'l Hasan, one of the finest painters of the imperial atelier.

The radiant and powerful Jahangir is depicted comforting his meek, submissive cousin, Shah Abbas of Iran. This has nothing to do with historical fact, however, and is pure wish-fulfillment on Jahangir's part. The rulers were intense rivals, the focus of their mutual antagonism centering on Qandahar, in Afghanistan, a territory and fortress under Mughal control.

In 1739 Nadir Shah of Iran attacked the Mughal capital at Delhi, seizing many of the best Mughal paintings and manuscript illustrations. These were mounted into albums prepared and decorated by the leading Persian artists of the day and eventually formed the compilation known today as the St. Petersburg album.

I had seen the same pic in another Museum and It was mentioned as Humayun and Shah.

They met in Mandu , Madhya Pradesh. Shah brought special tamarind in gift, the tree of those seeds are still there, and unique in India

this is beautiful. So is Mandhu!! Fabulous, magical place ....

Also please note the posture of Jahangir and Shah, Shah is cringing and Jahangir is benovelent. Notice the lion at Jahangir feet and lamb at feet of shah.

A painting from the hey days of Medici-Mughal interaction. Pietra Dura enters India during the same phase. According to art historian Ebba Koch, " the Antwerp Polyglot Bible was presented by the first Jesuit mission to Akbar in 1580. The title page showed the peace amongst the animals ( the lion lying down with the lamb under the just rule of the Messiah, as prophesied by Isaiah). The images of the polyglot bible stuck the Mughal emperors as a pictorial expression of their own literary imagery of ideal rulership." Not just Jahangir but Shah Jahan too uses this imagery of a just-global ruler. Note lion & lamb & also the guardian angels here ( http://en.wikipedia.org/wiki/File:Shahjahan_on_globe,_mid_17th_century.jpg )