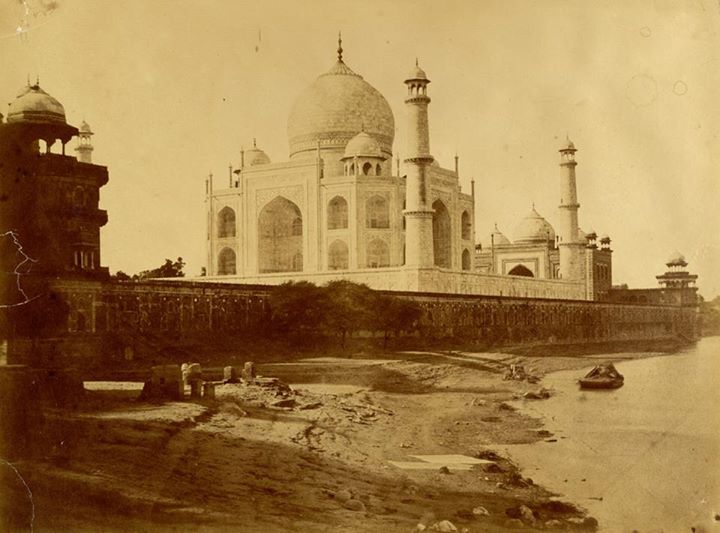 Near view of the Taj Mahal from the river Jumna, Agra - 1858

General view of the Taj Mahal from the riverbank just to the north-east, photographed in 1858 by Major Robert Christopher Tytler and his wife, Harriet. Both Dr John Murray and Felice Beato, who gave the Tytler's tuition in photography, took views of the Taj from an almost identical viewpoint. The information in the caption relating both to the meaning of Taj (Persian, crown) and to the kings of Delhi is incorrect. The Taj Mahal was built by the Emperor Shah Jahan for his favourite wife Arjumand Banu Begum upon her death in 1631. Constructed of India’s finest marble, quarried at Makrana near Jaipur, it took 12 years to build involving 20,000 craftsmen from all over Asia. The pietra-dura was done with thousands of precious and semi-precious stones imported from distant lands. The domed white marble mausoleum stands on a plinth with tapering minarets on each corner, at the end of the charbagh garden rather than the middle. To the mausoleum's west stands a triple-domed red sandstone mosque, and to its east the mosque's jawab or compositional echo.

Just for your kind attention....MAKARANA MINE is not near Jodhpur....but it's near Jaipur. On other hand Iam a very big fan of your page !!!!! :-D

All the more impressive on the heart when you see the inlaid lapis and coral less than a quarter of an inch in diameter every few inches around the base; majestic in size and intricate in tenderness as a monument to love and as a monumental mosque to remembrance of the One.

Thank you for sharing this lovely old photo.This enduring testament to a cherished lost love is an inspiration.

I have seen that side of Taj Mehal also.