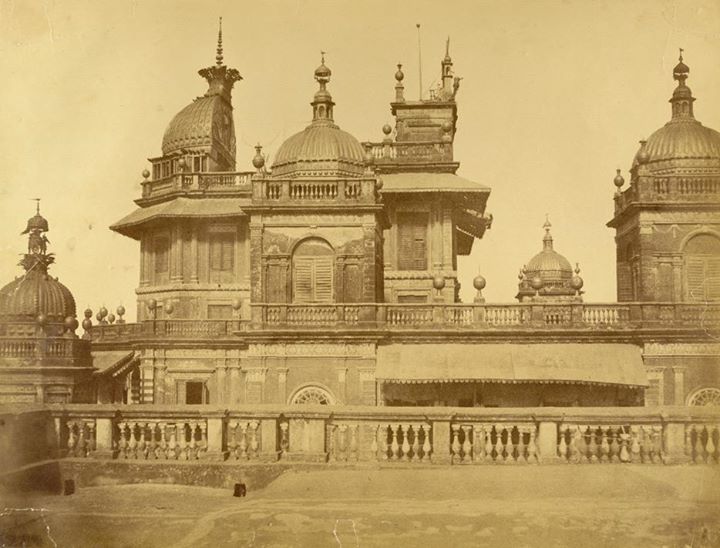 Top of the Palace of the King in the Kaiser Pasand, Lucknow. View taken from the top of a three storey house - 1858

Photograph of the Kaisar Pasand taken by Robert and Harriet Tytler in the aftermath of the Uprising of 1857. A caption note accompanying this print continues, "The Palace, about six storeys high, the dome on the left purposely cut in two, has the royal arms engraved in gold on it" The view in fact shows the top storey and domes surmounting the Kaiser Pasand, near the Kaiserbagh but outside the main complex. Roshanuddaula Kothi or Kaiser Pasand was built between 1827-1837 as a personal residence for Roshanuddaula, the chief minister of Nawab Ghazi-ud-din Haider (r.1827-1837). This building was taken by Nawab Wajid Ali Shah (r.1847-1856) and given to his wife Mashuq-us-Sultan and during the British period it was converted into government offices. Kaisarbagh complex was the scene of fierce fighting during the Uprising of 1857 and after the capture of Lucknow by the British in 1858 it was ransacked and looted.

What's the deal with the dome cut in two? By the British or by the Nawabs?

I dont understand.. Why the half-dome??

my ancestors were such builders

Really ! were they your ancestors? Do you really belong to the family of Nawabs of Lucknow?