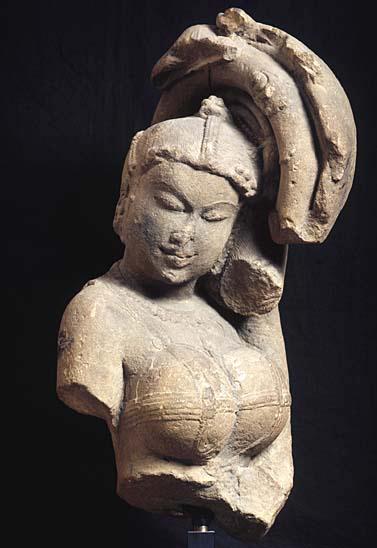 (Translation attributed to the Google translator from the original in French):

Since ancient times, India dedicated to the woman a special devotion. Figurines of the Indus Valley to the goddesses of fertility through the protective goddesses carved in the Gupta period at the entrance of the holy places. In medieval times, the woman remains a favorite subject for sculptors, whether Buddhist or Brahman. It appears, as here, in that it retains a traditional appearance over the centuries: sensual. This woman leaning against a tree fragment foliage, and which only the torso remains, has an ample bosom, her head tilted slightly to the right and twist the torso may restore the original position or tribangha "triple flexion" characteristic of Indian sculpture. Many ornaments that the parent (earrings, long beaded necklace) illustrate the passionate love of Indian women, from the earliest times to the present day, for ornamental elements.

The naturalistic treatment of the body, the roundness of form, purity and grace make this sculpture, a work full of charm that was to adorn the walls of shrines covered a multitude of goddesses school: devatas who charm the gods by their presence, and "women's tree" shâlabhanjikâ the symbol of fertility.

The production of art in northern India in the medieval period (ninth to fourteenth century) is rich and varied. Art Brahmanic there develops with extraordinary strength and wealth in large northern provinces - such as in Rajasthan, Madhya Pradesh and the West, on the site of Khajuraho - which create styles of architecture and sculpture individuals. In most of these areas, often grandiose architectures are always highly decorated.

This is really beautiful Swami.

Thank u AS for sharing..

The female figures with big bust and rounded hips adheres to the requirement of feminine beauty ... artists must have studied a grt many subjects before concentrating on certain traits and emphasizing them to render the essence or form of the category represented....

As quoted by someone elsewhere ~~~ A Man Asked a Sculptorist, "How Do You Make Such Beautiful Idols from Stone?". He replied "Idols & Images Are Already Hidden There....I Remove Unwanted Stone Only." MORAL - Your Happiness is Hidden Within You, Just Remove Your Worries.