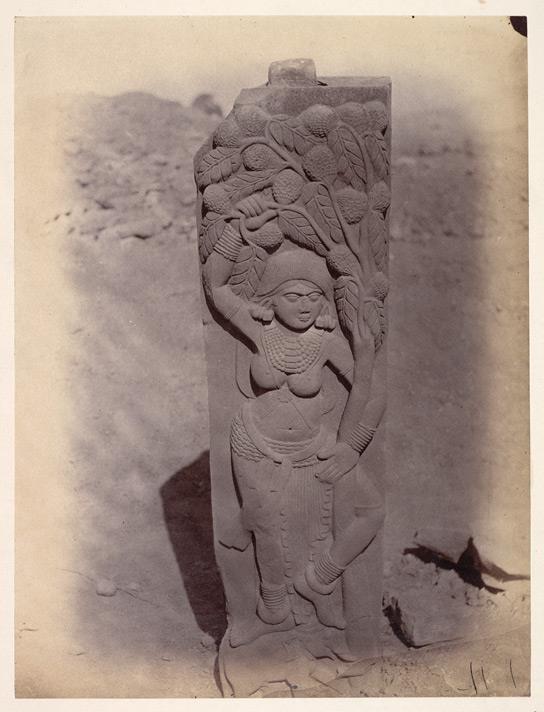 Sculpture piece excavated from the Stupa at Bharhut: Pillar with Culakoka devata - 1874

Photograph of part of a pillar depicting a jetavana scene, excavated from the stupa at Bharhut taken by Joseph David Beglar in 1874. We cannot be sure what part of the stupa this piece came from, however it was probably a section of a railing pillar. The exact date when a stupa was first erected at Bharhut is not known, however, when the railing was added in the latter half of the second century BC, the site had already been established as a Buddhist place of worship for centuries. When this pillar was added, the stupa complex consisted of a hemispherical dome, encircled by an inner and an outer railing or vedika. This would be made of rectangular stone posts (stambha) joined together by three sets of cross-bars (suchi) mortised into the pillars on either sides and capped by a huge coping (ushnisha). Evidence from inscriptions shows that the construction of the railing was funded by donors from all over India; Bharhut was known to people from a wide geographical area. The railing depicted narratives, such as stories from Buddha's life, the purpose of which would have been two fold: firstly to decorate and honour a sacred place and secondly to allow the religion an appeal to an often illiterate, popular audience. This is a pillar from the South-East quadrant. The inscription on it says ‘Culakoka devata’, little devata Chula, and the devata or goddess is represented as a salabhanjika with her leg entwined around the tree and supported by an elephant whose trunk is also entwined around the same tree.

all indian people have a nice happy diwali and lot of prays....