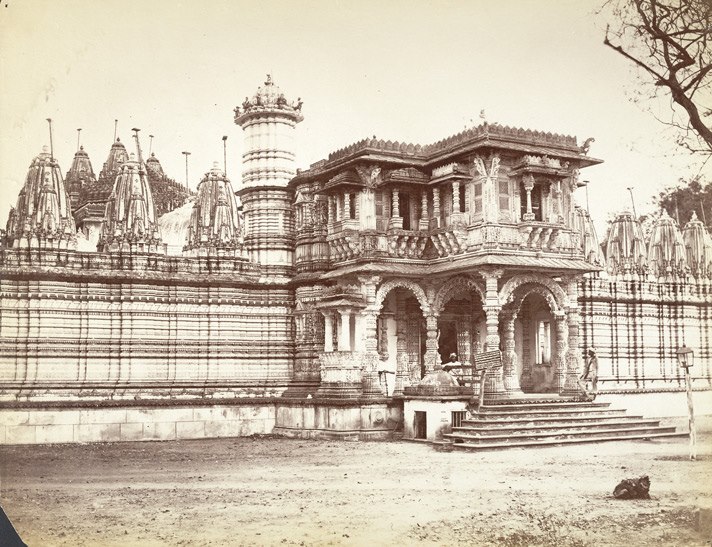 Photograph of the Jaina temple of Seth Hathisingh at Ahmadabad in Gujarat, taken by Charles Lickfold in the 1880s, part of the Bellew Collection of Architectural Views. Ahmadabad spreads along the river Sabarmati and is Gujarat's capital city. It was built on the site of Ashawal village, which had a history of settlement for thousands of years. The Sultan of Gujarat, Ahmad Shah I (ruled 1411-42), built a capital at Ashaval, naming it Ahmadabad. The city flourished and was a centre of art and literature. It was annexed in 1572 by the Mughal emperor Akbar (ruled 1556-1605), and prospered as a major textile centre. With the decline of Mughal power it was taken by the Marathas in 1758, and finally went to the British in 1817. Textile mills established in 1861 led to it being referred to as the Manchester of the East and Ahmadabad remains an industrial powerhouse of modern India.

The city contains a mix of Islamic, Jaina and Hindu architecture as well as Indo-Islamic blending of elements. This Jaina temple was built in 1848 in a revivalist style of medieaval Gujarati architecture.

Any relation to the Nehru son-in-law?

this place is in shahibag area, opposite H B K new high school.