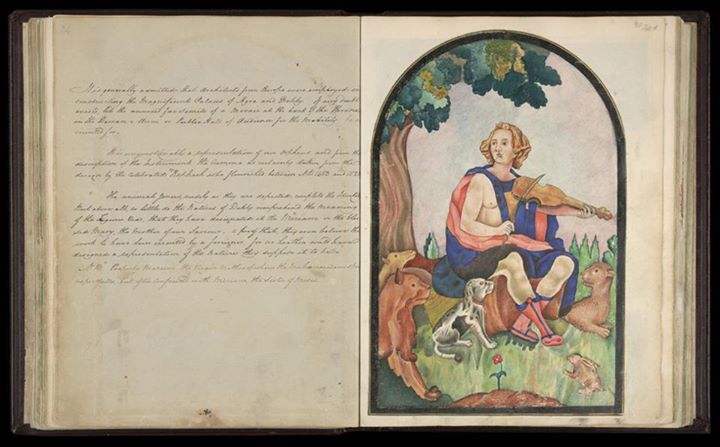 Essay:
The Synthesis of European and Mughal Art in the Emperor Akbar’s Khamsa of Nizami
By Gregory Minissale
October 13, 2000

The European engravings brought to India in the sixteenth century by the Jesuits to help communicate Christian doctrines to the Mughals are well documented. Prints of non-religious subjects and topographical materials, which need not have necessarily found their way into Mughal possession by way of the Jesuit missionaries is a subject that has been dealt with to a far lesser extent. Individual travelers and merchants took engravings of classical nudes and mythical subjects to the East; this would explain the presence in Mughal albums of prints of nude, mythological and classical subjects, and motifs from maps in background landscapes.


Image:
The panel of Florentine pietra dura work installed at the back of throne in the jharoka - 1843

[From 'Reminiscences of Imperial Delhi’, an album consisting of 89 folios containing approximately 130 paintings of views of the Mughal and pre-Mughal monuments of Delhi, as well as other contemporary material, with an accompanying manuscript text written by Sir Thomas Theophilus Metcalfe (1795-1853), the Governor-General’s Agent at the imperial court. Acquired with the assistance of the Heritage Lottery Fund and of the National Art-Collections Fund.]

It is generally admitted that architects from Europe were employed in constructing the magnificent palaces of Agra and Dehly. If any doubt exists, let the annexed facsimile of a mosaic at the back of the throne in the Dewan-e-Aum or Public Hall of Audience for the nobility be accounted for.
It is unquestionably a representation of our Orpheus and from the description of the instrument the Cremona as certainly taken from the design of the celebrated Raphael who flourished between AD 1483 and 1520.

The animal genus, rudely as they are depicted, complete the identity. But above all, so little do the natives of Dehly comprehend the meaning of the figures etc., that they have designated it the Miriam or the Blessed Mary (N.B. Properly Mareem, the Virgin Mother of whom the Muhammodans speak respectfully, but often confuse with Miriam, the sister of Moses), the mother of our Saviour, a proof that they even believe the work to have been executed by a foreigner, for no heathen could have designed a representation of the nature they suppose it to be.

[The panel of Florentine pietra dura work representing Orpheus charming the wild animals with his music, installed at the back of throne in the jharoka. The panel's central location above the throne of the Emperor was chosen as Orephus, the birds, flowers and lions appeared to symbolise the Throne of Solomon, the ideal model of Just Islamic kingship. (See Ebba Koch, 'Shah Jahan and Orephus', Graz, 1988). ]

There are several examples of this kind of 'synthesis' of European and Mughal art in the Diwan-e-Aam and Diwan-e-Khaas in the Red Fort in Delhi. The time interval between this work and Shah Jahan's monuments in Agra and Delhi is only about 50 years.