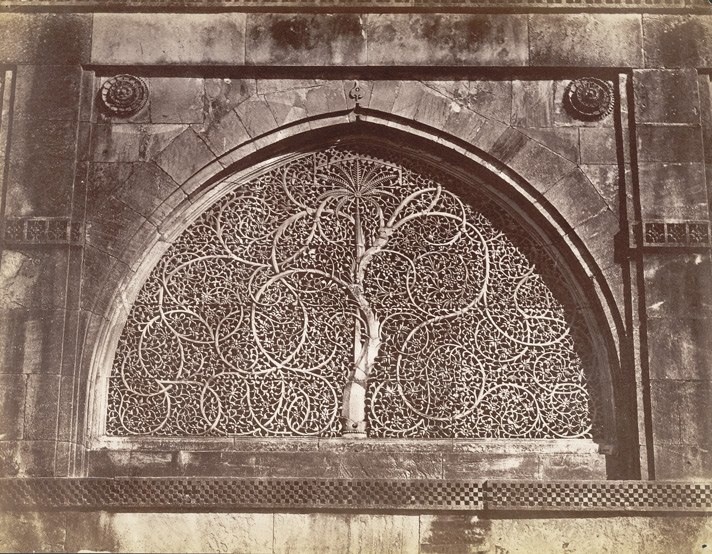 Photograph of a perforated screen in the Sidi Sayeed mosque at Ahmadabad in Gujarat, taken by Charles Lickfold in the 1880s, part of the Bellew Collection of Architectural Views. Ahmadabad spreads along the river Sabarmati and was built on the site of Ashawal village, which had a history of settlement for thousands of years. The Sultan of Gujarat, Ahmad Shah I (ruled 1411-42), built a capital at Ashaval, naming it Ahmadabad. The city flourished and was a centre of art and literature. It was annexed in 1572 by the Mughal emperor Akbar (ruled 1556-1605), and prospered as a major textile centre. With the decline of Mughal power it was taken by the Marathas in 1758, and finally went to the British in 1817. Textile mills established in 1861 led to it being referred to as the Manchester of the East and Ahmadabad remains an industrial powerhouse of modern India.

The architecture of Ahmadabad achieved a fine synthesis of Hindu and Muslim elements by the 15th century. Vernacular motifs drawn from the Indian tradition became integral to the architectural components. This is well demonstrated in the ten famous jali windows lining the upper walls of Sidi Sayeed's mosque, constructed in 1572, where the semicircular windows are covered with lattice-work stone screens with flowing trees and foliage patterns. The mosque is located within the original fortified citadel of Bhadra in the old city.

I can see source of IIM-A logo

Yes! That is indeed perceptive of all of you... http://en.wikipedia.org/wiki/Indian_Institute_of_Management_Ahmedabad

IIM-A logo is actually the Sidi Sayeed Jali, not resembles and not represents. It is and was always supposed to be this way :)

wow! Vijayant Singh you should see this one :)

It looks breathtakingly beautiful if observed from the other side with light filtering through. Have admired it countless times while passing by when I was based in Ahmadabad. The capital of Gujarat has however since relocated to Gandhinagar about 30 km away.

Blown away! Want to visit in person!

Ahmedabad is not the capital of Gujarat....its Gandhinagar...

hey we know that ahmedabad is not a capital but formalities only gandhinagar is a capital.........

There were total 9 different design on the 3 side of the mosque wall, 3 on each wall. I visited in 2011 , Now total 7 existed there. Two is not there, when i asked the eldest man there i think he was imam of the mosque, he told that one is kept in London museum and another is kept on the netry of UN office. What if someone can if it true. But i trust...there is nothing as parallel as this jali work in india..i challanege...keep the Taj mahal one side and this jali work on other side. Jali work will desrve more weight in term of art.