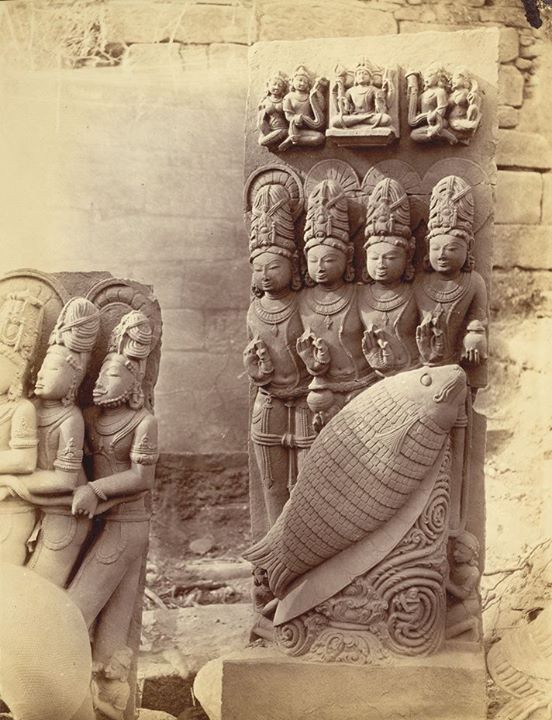 Photograph of a sculpture of the fish incarnation of Vishnu, Matsya avatara, from Gharwa, taken by Joseph David Beglar in the 1870s. At Garwa there is a pentagonal shaped compound inside which are the remains of a temple and other structures many of which are now un-identifiable. The earliest remains date to the Gupta period however the site was occupied for a number of centuries. This is attested to by the many different styles of sculpture that have been found inside the compound. This sculpture depicts the fish or Matsya which is the first of the ten incarnations of the god Vishnu. Under this aspect the god advised Manu, the patriarch of mankind, to build a ship in order to preserve himself, all seeds and animals from the primordial deluge.

Similar story of Noah in the Bible

This story predates Noah's story by a couple of thousand years, though.

great, I'd been needing its provenance!

Garhwa is a small sleepy village some 50 odd kms from allahabad (U.P) the above sculptural panel is from its ruined temples mostly from Gupta age (C. 350-650) and has characteristics of early Gupta art....

i'm not qualified as historian, but this reminds me of evolution theory, that land animals evolved from fish,